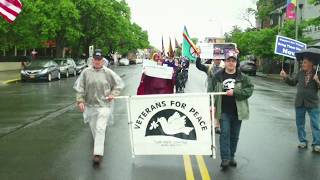 I was asked the question "What Does Veterans for Peace Stand For?" when I received that question forwarded as a part of the ongoing discussion in the American Psychological Association about changing the definitions of torture and the role of psychologists in interrogations:

From a Navy Lieutenant Commander Psychologist:

"I had not heard of Veteran's for Peace and that says a little something since I am pretty active on social media on military and veterans issues. I looked them up and they are not even included in the VA's list of VSOs. They have a minuscule profile on the internet and based on their website appear to be a small organization. Whoever wrote their Wikipedia page said they are 'generally reviled as treasonous by mainline veteran's groups like the American Legion ('The Legion'), Veterans of Foreign Wars (VFW), Amvets and the Disabled American Veterans (DAV).' I hope we can all infer from this that their views cannot be generalized to all, or even most, veterans.

"There is clear bias against military psychologists in the opening paragraph. The author states, 'We are also acutely aware of the military psychological industry's deleterious impacts on our lives [his personally?] and the lives of Peoples around the world.' Doesn't that sound a bit of an over-generalization? Jeez he makes it sound like all military psychologists are evil-doers waiting for the cops to go away so as to continue the plunder of humanity. Based on the author's arguments that it is impossible to stave off 'military toxicity,' shouldn't all professionals ban themselves from GTMO (including all physicians, and lawyers)?

"For something more balanced please see this. Or please read this article in Division 49's Journal of Peace and Conflict refuting the work of Stephen Soldz.

"No one is arguing that working at GTMO is free of ethical challenges, but come on, let's raise to the occasion and use our expertise (with consultation and supervision) to make detainees' lives better."

My response to this email is:

I served 29 years in the US Army/Army Reserves and retired as a Colonel. I was in the US Department of State for 16 years and served in US Embassies in Nicaragua, Grenada, Somalia, Uzbekistan, Kyrgyzstan, Sierra Leone, Micronesia, Mongolia. I was on the small team that reopened the US Embassy in Kabul, Afghanistan in December 2001. I was the Deputy Chief of Mission, or Deputy Ambassador in the last four Embassies. I resigned from the US government in March 2003 in opposition to Bush's war on Iraq.

Veterans for Peace (VFP) is definitely a small group of veterans when compared with American Legion and Veterans for Foreign Wars -- mainly because VFP advocates for peace, while the others are war supporters. "Peace" by conquering other lands and killing lots of people is NOT VFP. We challenge all the administrations -- Democrat and Republican -- on their war mongering policies.

Ann Wright is a 29-year US Army/Army Reserves veteran, a retired United States Army colonel and retired U.S. State Department official, known for her outspoken opposition to the Iraq War. She received the State Department Award for Heroism in 1997, after helping to evacuate several thousand (more...)
Related Topic(s): Activism Anti-War; Peace; Torture; Veterans; Veterans For Peace, Add Tags
Add to My Group(s)
Go To Commenting
The views expressed herein are the sole responsibility of the author and do not necessarily reflect those of this website or its editors.