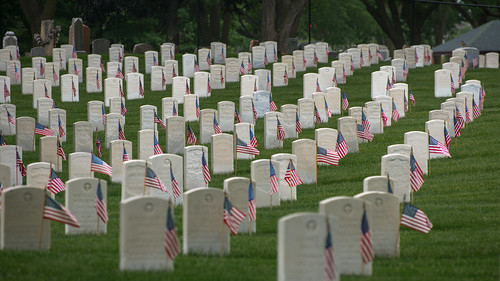 A lot of people in Third World nations previously invaded, currently being invaded, or suffering sanctions and the threat of invasion by Americans, will be watching telecasts via satellite of festive celebrations on Memorial Day in the great United States of America.

Telecasted news coverage of the Memorial Day holiday in the USA will show video clips of parades and speeches glorifying America's military and sanctifying war itself, obscuring the mourning of the deceased soldiers by families and friends. Many people watching in countries Americans invaded, will surely be wincing, their gaze turning serious and solemn, as they hear American GIs, who died while dutifully taking part in the killing, maiming and destroying in dozens of smaller countries all around the world, praised as heroes.

Many people watching the telecast in the countries Americans invaded will have gotten to know these mostly young American men who died invading their country in a deeper and more poignant sense than even their own parents. For example, of the two and a half million uniformed Americans, who were sent to Vietnam, hundreds of thousands mingled with Vietnamese up close in following out criminal orders and experienced a variety of emotions, some feeling guilt, shame and anger about the horrific suffering they were creating within a soft-spoken Buddhist population. Final body count statistics show fifteen Vietnamese defenders killed for every one American GI killed - imagine how many Americans GIs felt about this sickening ratio which they were perpetrating. This author, during Veterans For Peace meetings has heard members speak personally of never-forgotten-atrocities they were pained to take part in. I remember one veteran telling of picking up the cap of a Vietcong his unit had killed and finding a picture of what must have been the Vietcong's wife and child secured in the cap's lining, and thinking 'we just created another orphan and widow.' The citizens of nations bombarded and invaded must sometimes wonder what the dead American soldiers being thanked and praised on Memorial Day by politicians and generals, would say if they could speak out from their graves.

Your author can well imagine what his four basic training bunk buddies, whose bodies were thrown into a hole somewhere in North Korea, would say about being thanked for dying for their country every Memorial Day. During sixteen weeks of basic training, how very full of life and fun they were, as most 18 or 19 olds are. Likable Ed, Joe, Bob and Bill found themselves in a very poor country - people speaking a language they could not understand - in mortal combat with Koreans in their Korea. They were told they were fighting communism, but they would have realized while dead in that hole that they were sent to die to protect capitalism, colonial capitalism, the opposite of freedom for most of the world. They would have been pissed to know criminal media portrays them as just so stupid to have been suckered into killing fellow human beings and dying young - for who and for what?

Granted that many who died in military action, remained to the end duped and loyal to the propaganda they had been fed, gung-ho to kill anyone designated as 'communist' or 'terrorist,' but a much greater multitude of those GIs who in lost their lives in combat in someone else's country, had come to see the truth of an imperialist USA, ruled by its wealthy speculative investors on Wall Street, who use the nation's armed forces, as Martin Luther King said, "to make atrocity wars and covert violence to protect unjust predatory investments overseas."[1]

Let's suppose these hundreds of thousands of savvy dead Americans chose someone well spoken from their midst to be a spokesperson for all of them - the dead GIs who died fighting citizens of some country far from America - dead GIs who finally lost faith in their countrymen, their ministers, priests and rabbis, their universities.

Further suppose that having lost faith in their own countrymen, who had sent them to a ignominious death, these angry dead Americans had their spokesperson speak to the whole world, and especially to that great majority of humanity living in the Third World in nations once attacked or being attacked by Americans in uniform today, figuring that only the people in the nations attacked are capable of uniting and using their huge numerical superiority to halt America's blood lust. Here below, in this author's imagination, is what this intelligent phantom spokesperson for the dead GIs might best say:

(What Dead GIs Would Say To the World on Memorial Day About Being Praised For Their 'Heroic Sacrifice' - if They Could.)

Related Topic(s): Cia Media Control; Controlled Media; Media For War; Media Lies; Media Monopoly As Disinformation; Military Industrial Media Complex, Add Tags
Add to My Group(s)
Go To Commenting
The views expressed herein are the sole responsibility of the author and do not necessarily reflect those of this website or its editors.