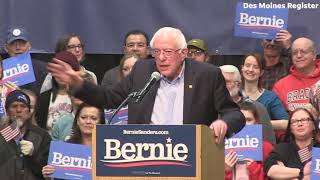 For generations, the politicians consistently and publicly finding fault with the news media have largely been Republican. But as frustrations rise on the other side of the aisle this campaign season, more Democrats are speaking out, led by Sen. Bernie Sanders. His structural critique of corporate media in America is an important one and goes to the root of so many shortcomings during the Donald Trump media era.

Sanders sparked some controversy when he suggested he was getting poor coverage from The Washington Post because it's owned by Amazon founder Jeff Bezos, whose hiring practices Sanders has criticized in the past. Some journalists ridiculously likened Sanders' comments to Trump's, and lumped them together as being anti-media. But Sanders soon walked back the Bezos allegation, which was helpful because that way it doesn't cloud his larger, more important points about our corporate media infrastructure and how American news consumers are informed -- or ill-informed.

"There are six major media conglomerates, including Time Warner which owns CNN, which control about 90% of the media in this country in terms of what we see, hear and read. Between you and me, that is a very dangerous situation," Sanders told CNN's Anderson Cooper last week. "The CEOs make tens of millions of dollars a year in compensation. They have an agenda, and I worry about that, as I do worry about concentration of ownership in agribusiness, in Wall Street and in many other areas."

That kind of massive consolidation inevitably leads to group-think. And under Trump, who constantly threatens industries that he perceives to be his enemies, that leads to timidity.

Let's be clear: The media's Trump-era timidity isn't just happening. It's not a fluke that major news organizations in this country continually pull back from telling the truth about Trump on a daily basis -- that he's a "liar" and a "racist," and he appears to be unstable. Those are not stories the bullied press corps has aggressively and unapologetically pursued. Invisible barriers remain in place, and part of the explanation for that is reflected in Sanders' critique.

Related Topic(s): Amazon; Bernie Sanders; Bernie Sanders Presidential Campaign; Corporate Media; Media Bias; Media Washington Post; Right Wing Media, Add Tags
Add to My Group(s)
Go To Commenting
The views expressed herein are the sole responsibility of the author and do not necessarily reflect those of this website or its editors.