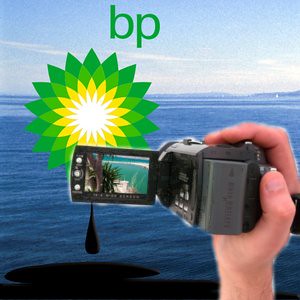 CBS journalists were filming a beach in South Pass, Louisiana, when, according to CBS, a "boat of BP contractors and two Coast Guard officers told them to turn around or be arrested." The incident is thought by bloggers tracking the oil leak in the Gulf to not be the only time that BP has challenged the right of journalists to film.

If in fact BP has instructed crews to specifically regulate and turn away groups with video cameras or even still cameras, this raises many questions about what Americans are able to access and not access, what theyare able to document and not document.

Should a person have to be embedded with authorities, corporations or organizations at the center of a disaster in order to document a disaster? Must a person be with a recognized news organization that regularly gets into press conferences in order to film critical events like the BP oil leak in the Gulf of Mexico right now?

Journalists were told by "someone aboard the boat" this is BP's rules, not ours. That alone would be enough to seriously question the situation and ask why citizens should have to follow rules and only document what authorities, corporations, or organizations involved grant citizens permission to document. But, the Coast Guard was present and they released a statement on the matter that was published by the Mother Nature Network.

"CBS Evening News reported they were denied access to oiled shoreline by a civilian vessel that had clean-up workers contracted by BP, as well as Coast Guard personnel on board. CBS News video taped the exchange during which time one of the contractors told them (on tape) that " ... this is BP's rules not ours."

Neither BP nor the U.S. Coast Guard, who are responding to the spill, have any rules in place that would prohibit media access to impacted areas and we were disappointed to hear of this incident. In fact, media has been actively embedded and allowed to cover response efforts since this response began, with more than 400 embeds aboard boats and aircraft to date. Just today 16 members of the press observed clean-up operations on a vessel out of Venice, La.

The only time anyone would be asked to move from an area would be if there were safety concerns, or they were interfering with response operations. This did occur off South Pass Monday which may have caused the confusion reported by CBS today.

The entities involved in the Deepwater Horizon/BP Response have already reiterated these media access guidelines to personnel involved in the response and hope it prevents any future confusion." [emphasis added]

That the Coast Guard, a national military organization, is going along with whatever happened between BP and the CBS journalists should lead those involved in the creation and production of media to be even more concerned. The Coast Guard is, with this statement, legitimizing BP's right to limit the privileges of those wishing to document the destruction.

When one breaks down the "400 embeds aboard boats and aircraft to date" the Coast Guard claims BP has allowed, it comes out to approximately 13 embeds per day in the month since the oil rig explosion occurred. And, if each embed is one journalist, this means 13 journalists per day have been allowed (on average) to document the disaster and response efforts/failures.

Kevin Gosztola is managing editor of Shadowproof Press. He also produces and co-hosts the weekly podcast, "Unauthorized Disclosure." He was an editor for OpEdNews.com
Related Topic(s): Bloggers; British Petroleum; Civil Liberties; Corporations; Freedom; Freedom Of The Press; Gulf Of Mexico; Gulf Oil Spill; Journalism; Media; (more...) Media Network CBS; Media Press Repression; Oil; Reporters; Threats; US Coast Guard; Video, Add Tags  (less...)
Add to My Group(s)
Go To Commenting
The views expressed herein are the sole responsibility of the author and do not necessarily reflect those of this website or its editors.