"What are you reading?"queried the large black letters atop a tent wall at UCLA.

On this ultra unique canvas, the literary ice-breaker what are you reading? isn't answerable with a typical verbal reply. Responding to what are you reading? here, at the 15th annual Los Angeles Times Festival of Books, requires finding space on the formerly all-white wall that after just two hours is dense with book titles, ranging from children's classics to the coming-of-age The Catcher In The Rye, to seemingly equal numbers of postings of The Bible and The Koran. In a city known for its Hollywood glitz and climate-friendly outdoor living, what many don't know about Los Angeles is how much it reveres its book festival; the largest in the nation, attended by 130,000 readers of all ages and ethnicities.

The Los Angeles Times Festival of Books is a cornucopia of literary and intellectual treats. It is two full days of panel discussions, live stage events and seemingly endless booths of books, reading paraphernalia and special interest vendors. There are booths devoted to spirituality, religion, and to no religion at all:

Rows of booths line the campus as far as the eye can see, filled with books on every conceivable topic, including travel, health and wellness, education, history, science, philosophy, performing arts, fine arts, writing, writers, poetry and politics:

The Festival of Books has an innovative and invigorating program for kids. Its list of famous children's book authors could comprise a typical award show. Some of this year's childrens' author performers were Carl Reiner, Peter Yarrow, Henry Winkler, Shawn and Marlon Wayans, Holly Robinson Peete and Bernadette Peters.

But the kids weren't the only ones having fun at the festival. The LA Times Stage hosted some of the best author/comedians in the business. On Saturday, Curb Your Enthusiasm's Jeff Garlin was convulsingly funny as he described his big weight loss and what it's like to work with the great Larry David, who Garlin describes as a genius. 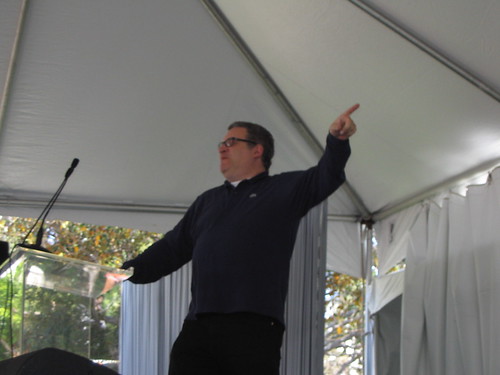 On Sunday, Sarah Silverman brought down the house as she read a dozen messages left by her father on her voice mail. Silverman was as funny and she was wise. Responding to a questioner who asked what advice she would give a young comedian, Silverman replied:

Don't let yourself be compromised. The way not to compromise yourself is not to be owned by money. I probably have the smallest ratio of money to comedian anywhere. I own my SAAB and after this book I'll also own my apartment.

Silverman's father's voice messages spoke volumes of his disdain for the hubris of the rich. It's obvious his sentiment was passed on to his daughter - refreshingly and unselflshly so.

Related Topic(s): Books; Books; Children; Journalism; Justice; Los Angeles; Los Angeles Times; Media; Non-Fiction; Religion; (more...) Spirituality; UCLA; Writing; Writing, Add Tags  (less...)
Add to My Group(s)
Go To Commenting
The views expressed herein are the sole responsibility of the author and do not necessarily reflect those of this website or its editors.