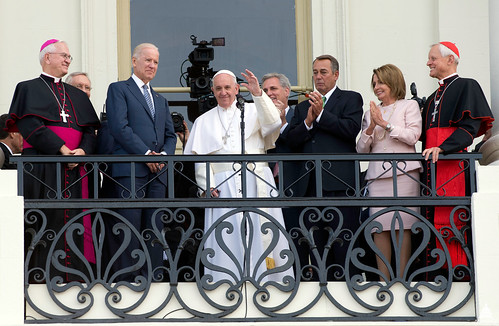 Duluth, Minnesota (OpEdNews) May 1, 2021: Figuratively speaking, I write to sing my praises of Steven Mailloux for his perceptive scholarly essay "Political Theologies of Sacred Rhetoric" in the anthology Responding to the Sacred: An Inquiry into the Limits of Rhetoric, edited by Michael Bernard-Donals and Kyle Jensen (Penn State University Press, 2021, pages 77-98).

For example, I assume that the Reverend Dr. Martin Luther King, Jr. (1929-1968), was prompted to engage in political activism because he interpreted certain experiences in his life as experiences of the sacred. However, Mailloux does not happen to advert explicitly in his essay "Political Theologies of Sacred Rhetoric" to any of Dr. King's speeches or writings as examples of political theologies of sacred rhetoric.

However, Mailloux does explicitly refer to the extemporary speech and the formal publications of Pope Francis (born Jorge Mario Bergoglio in Buenos Aires, Argentina in 1936; elected pope in 2013). Pope Francis is not only the first pope from South America, but also the first Jesuit pope. Consequently, Mailloux discusses Jesuit spirituality in connection with Pope Francis.

The formal publications of Pope Francis that Mailloux refers to are available in English at the Vatican's website, as Mailloux notes in his bibliography entries about each of them. Of course, Pope Francis' most widely read formal publication was his 2015 eco-encyclical, known formally as Laudato si': On Care for Our Common Home, which unmistakably represents one example of what Mailloux refers to as political theology of sacred rhetoric.

However, because President Joseph R. Biden, Jr., is a practicing Catholic, we should also note here that Mailloux also refers to Pope Francis' 2015 "Address of the Holy Father" to the U.S. Congress as another example of what he refers to as political theology of sacred rhetoric.

Now, because Pope Francis is the first Jesuit pope, a word is called for here about the Jesuit order. The Jesuit religious order in the Roman Catholic Church is known formally as the Society of Jesus. It was founded by St. Ignatius Loyola (1491-1556), who is the author of the short book of incisive instructions known as the Spiritual Exercises. The incisive instructions are designed for persons on retreat to follow as they undertake guided imagistic meditations and contemplations during their retreat. As part of the lengthy Jesuit formation, Jesuits such as Jorge Mario Bergoglio make two thirty-day retreats in silence (except for the daily conferences with the retreat director) following the Spiritual Exercises of St. Ignatius Loyola. To replenish their spiritual lives, Jesuits usually make an eight-day retreat once a year, following a streamlined version of the Spiritual Exercises of St. Ignatius Loyola.

I am here referring to guided imagistic meditations and contemplations because I am borrowing the term imagistic from the classicist Eric A. Havelock's use of the term imagistic thought in his seminal book Preface to Plato (Belknap Press of Harvard University Press, 1963). By doing this here, I hope to call to mind the oral-aural processing involved in making the Spiritual Exercises of St. Ignatius Loyola.

Now, Jesuit formation is lengthy and involves many dimensions of their lives - above and beyond those special times of prayer when they are making retreats following the Spiritual Exercises of St. Ignatius Loyola. Even though Jesuit formation is deliberate and self-conscious, we should reflect here on the relatively unconscious ways in which we are formed by the cultures and sub-cultures in which we have grown up (e.g., American culture in general and/or American Catholic sub-culture, etc.). Because our relatively unconscious cultural conditioning is manifold, Jesuit formation is designed to be manifold.

The late American Jesuit psychiatrist W. W. Meissner (1931-2010) examines the psychology of the Spanish mystic in his book The Psychology of a Saint: Ignatius of Loyola (Yale University Press, 1992).

Now, Jesuits are not the only persons who make eight-day retreats, or even thirty-day retreats, following the Spiritual Exercises of St. Ignatius Loyola. Indeed, the Jesuits run retreat houses where various persons may make such retreats.

Persons make Ignatian retreats at Jesuit retreat houses to step back a bit from their regular daily lives and to replenish their spiritual lives by making time in their lives to experience the sacred to the extent that they can. As far as I know, the experience of the sacred is open to all persons, including all persons who read op-ed pieces at OEN, as I noted above.

Now, because the meditative practice known as mindfulness is well known in the United States, I should point out here that the practice of guided meditation and contemplation following the instructions in the Spiritual Exercises of St. Ignatius Loyola is strikingly different from the meditative practice known as mindfulness. In an Ignatian retreat, the person is called upon to engage his or her imagination and senses as well as his or her memory.