Religious fundamentalists turned the showmanship of an Alabama hustler into a national media circus. 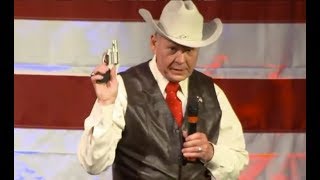 Judge Roy Moore, the "Ten Commandments Judge" in Alabama now running for the U.S. Senate, says the controversy he and Fox News have stirred up is about religion.

"Reporters don't understand religious liberty and where it comes from," Moore told reporters in Washington DC this week. "It comes from God," he said, "not from the Constitution."

Moore, of course, is wrong. These efforts by the so-called religious right are not about religion. They're about power. A power that seeks, ultimately, to replace democracy.

We were warned about people like Moore, and media like Fox, by the founders of our nation and the framers of the U.S. Constitution.

The judge's main arguments for keeping a graven image of the Ten Commandments in the Alabama Supreme Court rotunda are, he said, that America is a Judeo/Christian nation founded by Christians, and that the foundation of American law is the Bible and the Ten Commandments. He's repeating these claims in his run for the Senate.

The most well-known of the Founders and Framers of this nation -- those who wrote the Declaration of Independence, led the Revolutionary war, and wrote the Constitution -- would strongly disagree with Moore and Murdoch's Fox on all counts.

Instead, the record tells us that many of the Founders and Framers believed that secular democracy is a more powerful unifying force for a decent and peaceful civil society than any religion ever was or could be. Although most were spiritual in their own ways, and many were also openly religious, as students of history, the Founders and Framers knew the damage that organized religion could do when it gained access to the reins of political power.

The Founders clearly divided power into four categories: military, religious, wealth/corporate, and political. The interaction of these types of power produced the three historic types of tyranny -- warlord kings; theocratic popes; and wealthy feudal lords or monopolistic corporations like the East India Company.

Every past tyrannical government in the history of civilization, our Founders realized, had oppressed its citizens because it had combined political power with one or more of the other three categories. This, they believed, was the fatal flaw of past forms of governance, and they were determined to isolate political power from each and all of the other three to prevent America from repeating the mistakes of previous nations.

Thus, political power would only be held by "We the People," and never again shared with military, corporate, or religious agencies.

For example, to keep political power from combining with military power in the new United States of America, the army was put under the civilian control of the elected president, and he, in turn, was legally incapable of declaring war (that power being given solely to Congress). As James Madison pointed out on April 20, 1795, presidents will always be tempted to gain excessive power by becoming warlords, which is why Congress must withhold from presidents the power to make war.

"In war," Madison wrote, "the discretionary power of the Executive [president] is extended. Its influence in dealing out offices, honors, and emoluments is multiplied; and all the means of seducing the minds, are added to those of subduing the force of the people. The same malignant aspect in republicanism may be traced in the inequality of fortunes, and the opportunities of fraud, growing out of a state of war...and in the degeneracy of manners and morals, engendered by both.

"No nation could preserve its freedom in the midst of continual warfare."

Related Topic(s): Alabama Chief Justice Roy Moore; American Presidents; Founding Fathers; Fundamentalists; Religion; US Constitution, Add Tags
Add to My Group(s)
Go To Commenting
The views expressed herein are the sole responsibility of the author and do not necessarily reflect those of this website or its editors.