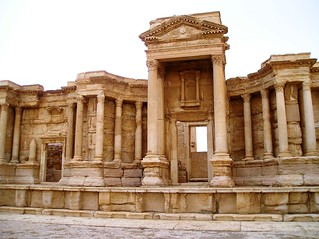 The West and its allies are perpetrating unspeakable yet well-documented crimes against humanity as Washington forges ahead with its pre-planned agenda to destroy non-compliant areas in the Middle East and North Africa (MENA) in favour of its Wahhabi-inspired proxy armies, which include ISIS and al-Qaeda/Jabhat al-Nursra.

US led NATO and its allies, including Wahhabi Saudi Arabia and Apartheid Israel, are perpetuating these crimes beneath ridiculous banners of "humanitarian interventions" and/or the "Global War On Terror" (GWOT).

This rampaging project of deception, death, and destruction follows a predictable colonial script wherein domestic populations are deceived as target countries and their peoples are destroyed and subjugated.

Most of the colonial military strategies are on full display in the terrorist invasion of the democratic Syrian Arab Republic (SAR), led by its reformer president, Bashar al-Assad.

The coercive strategies being used include these:

The end-game is to de-populate and to destroy target countries and to subjugate the remaining population.

A snap-shot of Syria prior to the invasion, helps to illuminate the imperial strategies of destruction. An article ironically titled "Les crimes de Bashar Al-Assad depuis juin 2000" lists some of Assad's notable accomplishments:

Related Topic(s): Bombing; Disinformation; Western Media, Add Tags
Add to My Group(s)
Go To Commenting
The views expressed herein are the sole responsibility of the author and do not necessarily reflect those of this website or its editors.