The professor who teaches "ethics" at West Point last year lost two debates on the topic of whether war can ever be justified. Videos: one, two. I admit to being biased, as I was the one debating him, but the first event polled people at the start and finish and found that they'd been moved in the direction of agreeing with me. At the second event, the moderator failed to poll the audience, and I suspect the audience was more in agreement with me to begin with, but the video speaks for itself.

The idea that a war can be justified by an ancient imperialist set of sophistries is thoroughly debunked here. That's a link to a book I wrote in preparation for a debate on "Just War" theory with a professor who writes books in defense of it. Here's the video of that debate.

I believe it is plain from watching such videos that no great skill is required to debunk this stuff, that it falls under its own weight. But, perhaps I'm biased. Judge for yourself. 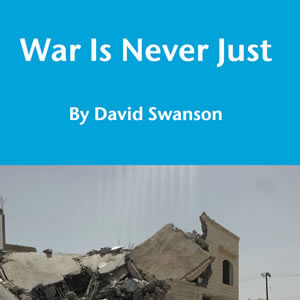 David Swanson is the author of "When the World Outlawed War," "War Is A Lie" and "Daybreak: Undoing the Imperial Presidency and Forming a More Perfect Union." He blogs at http://davidswanson.org and http://warisacrime.org and works for the online (more...)
Related Topic(s): West Point, Add Tags
Add to My Group(s)
Go To Commenting
The views expressed herein are the sole responsibility of the author and do not necessarily reflect those of this website or its editors.