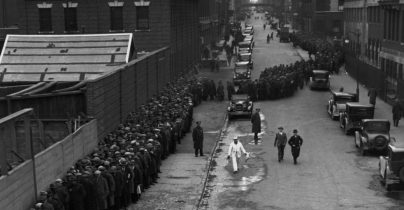 The draconian measures being taken or certainly being talked about - food rationing?!- will end up killing more people than the virus.

2.2 million dead from the corona virus, predicts a study cited by the New York Times.

How many elderly will die because their caregivers can't get to them (bye bye meals on wheels)? How many people already on special diets won't be able to maintain them and get sick as a result? (Me, I eat mostly fresh, unboxed/uncanned food, devoid of extra salt and sugar, instead of the cheap crap that only governments will pay for).

People will die from this too.

Think you can can substitute daily school lunches for actual school and not have the same infection rate? Forget it. It'll slow it down for a couple of weeks at most. And in New York City, 74% of the children in public school are poor. Without school lunch they go hungry. With school lunch, and then a return to home, their parents - or parent, singular, since many come from single parent households - can't work, they can't staff our hospitals, clean our streets, or do any of the hundred things the Departments of Health say are necessary to contain the virus.

People will die from this too.

I'm not usually paranoid, but this seems to be a way of trapping people into a police state. Oh, and yeah, what happens to the actual police who have to enforce this regime of deprivation? Will they use force when someone wants to go for a jog? If they injure someone, who will treat them in the over-crowded hospitals? Supposedly, exercise is fine, but what if you want to go jogging or biking in a group? I am scheduled to lead a 50-person bike group around New York City the end of April. Is that against the laws now? Wait...what law? Expect court challenges...wait, what courts? They are all working remotely or not at all. Our Civil Rights are already gone but we just don't know it yet. Where is the ACLU? They are silent. Rights for LGBT, for voting...wait, long lines at polling stations. That's already forbidden. Ohio postponed its primary for today. A half dozen other states did as well.

And recessions kill. You can't pay your bills. Evictions and utility shutoffs are supposedly illegal in our new communist state, but what happens when the landlord or utility can't pay its bills? Yes I know, record profits for utilities in the last few years. But that went into buybacks. That wasn't against the law and still isn't. It SHOULD be but it wasn't. And corporations are deep in debt now, and bankruptcies will follow in a week or so; it's that close. The economy is being unraveled and government can't, or won't, even pass the first of dozens of mitigating bills in the New Communism. The New Communism includes tax breaks and bailouts for the largest corporations though, $850 billion worth, so the Administration has learned nothing. Worse, actually, the centerpiece of the proposal is to eliminate the payroll tax, which will save corporations many millions, might trickle down to the employee, unless the corporations pocket the extra, and won't help those out of a job or working for tips at all. Even worse, it will gut Social Security and Medicare, already due to start running out of money in a few years, even during Trump's next term - and yes, he will get another term unless Biden or Sanders can distinguish themselves by what they will do differently, AND we have a recession. But, getting back to Social Security and Medicare; Trump has already said he wants to rein in the costs (read: gut or eliminate the programs millions depend upon to survive). Trump wants a permanent underclass, not entitled to any entitlements, even those it earned. He wants the free-to-be-corrupt market to provide for your old age or illness, or to let you die if you don't plan 40 years ahead, or anticipate cancer.

This is permanent. We are giving up our rights supposedly temporarily. But that's what was said after 9/11, and we still have the Patriot Act and a permanent war footing. BTW, presidential candidate Tulsi Gabbard wants a $1,000/month guaranteed income for everyone. That would be much more in keeping with our Civil Rights and much more fair. But no one is listening to her in the MSM or debates,where she is excluded.

This is permanent. This will kill more people than the virus ever would.

So, again, more people will die from the measures to contain the virus - which will ultimately fail anyway - than from the virus itself.

Related Topic(s): Bailout; Buybacks; Corona Virus Coronavirus Covid-19; Debt; Depression; Economy; Trump; Viruses, Add Tags
Add to My Group(s)
Go To Commenting
The views expressed herein are the sole responsibility of the author and do not necessarily reflect those of this website or its editors.