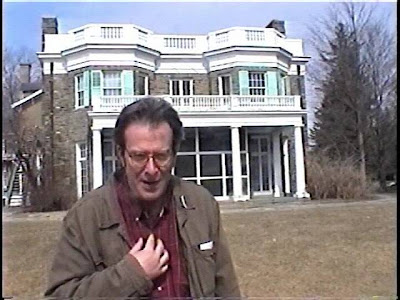 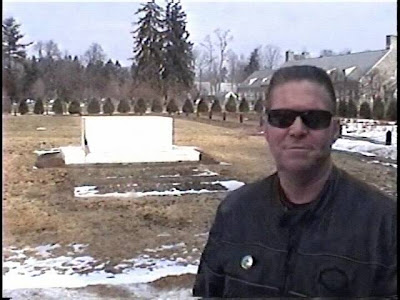 "But first of all, let me assert my firm belief that the only thing we have to fear is fear itself - nameless, unreasoning, unjustified terror - which paralyzes needed efforts to convert retreat into advance."

Dan O'Brien is one of my oldest friends in the world. Born on August 4, 1958 he is twelve days older than I and (he believes) at least seven and a half months wiser. Although he leans slightly right-of-center politically (let's cut the man some slack; he's spent the last quarter century in Florida) he is still enough of a progressive thinker that, were he to run for president as a Republican candidate, he would not win a single primary south of the Delaware water gap. Recently, Dan decided to take a little Northward Ho sabbatical and pay a two-week visit to Goshen, NY where we both grew up. I moved back to Goshen in 1992. Dan has not been here in since the Christmas holiday season of 1988 when he stopped by my parent's house to pay a visit to my father who was dying of brain cancer.

One of the best things about the part of the country in which I live is the fact that I am a mere forty miles from Hyde Park, NY, where is located the life-long home and final resting place of the Rolls Royce of chiefs-executive, Franklin Delano Roosevelt. From where my van is now parked, I drive one mile through the village to Route 17. Heading west, I travel four miles to exit twenty-one. There I get on Route 84 and travel twenty-one miles. At exit ten I make a decided (although not extreme) left turn at the bottom of the ramp and journey fifteen miles to the Mid Hudson (or the "Franklin D. Roosevelt") Bridge. Once I cross the Hudson River, it is a scant four miles to the Roosevelt Library and Museum. Since I will normally resort to any excuse to drop by the joint, Dan's visit to New York State was all the reason I needed. And so we went - on two consecutive days.

As I wrote on this site almost a year-and-a-half ago on, visiting the FDR Library is (for me anyway) therapeutic. No matter how crazy things might get, I always walk away from the place feeling a little better about the United States. The last eight years have been enough of a train wreck to try the soul of any clear thinking man or women, and I have found myself making more and more pilgrimages to a site which (for progressives) is almost holy ground. After two solid days (which included two tours of the mansion, expertly given by Mr. John Fox) I am more hopeful about this brilliant but troubled country than I have been for a very, very long time.

"It was said of him at the time of his death on April 12, 1945, "Although he never regained the use of his legs - much as he wanted to; much as he tried - he taught a crippled nation how to walk again." He was the pampered son of privilege from Hyde Park, NY whose battle with polio, begun in the summer of 1921, ingrained into his soul a deep and abiding empathy for the suffering of others that had previously been somewhat lacking in him. Through the development of a series of radical, revolutionary programs - unparalleled in history - which his administration brought into the main stream of American social engineering, he was able to usher millions of regular people into the ranks of a middle class that had not even existed before he took the oath of office on March 4, 1933. It is now almost a cliche but it is as true as the rising sun: He saved capitalism by "tempering its excesses." The people would elect him to an unprecedented four terms. Franklin Delano Roosevelt was - beyond a doubt - the greatest president in American history."

On entering the grounds of the FDR Library, a person with a decent sense of historical perspective is overcome by the aura of Roosevelt - or, as I like to call it "the Frankie vibe". A new exhibit which was added almost a year ago is called "The First Hundred Days". It is a grim reminder of what life was like for too many people in this country seventy-six years ago. It might also be a disturbing precursor to what may yet come to pass. We shall see.

It is not by accident that FDR has been the most talked about former president in recent months. The similarities (and there are a number of them) between the economic calamities of 1933 and 2009 are close enough that one should be forgiven for breaking out in a cold sweat. The situation is not - at this writing anyway - at the point of despair; or at least I don't think it is. But while walking through the corridors of the Franklin D. Roosevelt Library and Museum with my old pal Danny O'Brien, it was next-too-impossible to avoid asking the question, why. Why did the American people essentially reject the tried and true philosophy of the New Deal almost three decades ago and replace it with the "trickle down" insanity of the Reagan era? After twenty-nine years of consistently voting against their economic interest, the middle class has awaken to find themselves teetering on the edge of the precipice. Did you have a nice little nappy time, kiddies?

After having spent the better part of Friday afternoon touring the library, taking in the exhibits and pausing for a quiet meditation in the rose garden where Franklin and Eleanor today lie side by side, we made our way home to Goshen where we watched the four-hour documentary on Roosevelt's life that appeared on PBS's American Experience over ten years ago. The following morning, Dan was still possessed enough of the Frankie vibe that he insisted on going back for another look. When you purchase a ticket for a guided tour of the Roosevelt homestead, it is valid for two days. We decided to take advantage of this nifty little deal. Saturday morning, after a quick breakfast at our friend Pete's Smith's diner, Elsie's, on West Main Street (How's that for a shameless plug?), we were on our way back to Hyde Park.

"His smiling, jolly disposition which was always on display for the press and newsreel photographers, belied the hidden reality of a deeply complex man - many layered, indefinable, even tormented. His closest confidantes would testify years after his passing that they always had the feeling that they never really knew him. Emotionally he would keep even his loved ones at bay - so difficult was it for him to reach out on an intimate level to another human being. Throughout his life he would project to the world and to those around him, a cheerful - albeit guarded - amiability. That he could be devious at times there is no doubt. He enjoyed setting members of his own cabinet against one another in order to play for time in pursuit of the desired solution to whatever pending political problem that might have been manifesting itself at any given moment. But his all-too-obvious human frailties should not distract us from the larger picture: We are a better nation because of Franklin Roosevelt - and far too many Americans are abysmally ignorant of this fact."

For my money, the most interesting part of the museum is the Eleanor Roosevelt Wing. God blessed America by uniting this extraordinary man with so extraordinary a woman. We now know that theirs was a difficult, troubled union. Eleanor's discovery in 1918 of Franklin's love affair with her secretary, Lucy Paige Mercer, forever ended the intimacies of their marriage. But the political partnership between these two remarkable human beings - which slowly evolved in the years after he was stricken with infantile paralysis in 1921 - would change the way the American people viewed their relationship with government. Franklin and Eleanor Roosevelt were guided by the peculiar notion that our government is the servant of the people. According to them the purpose of representation in Washington involved a whole lot more than making war and passing bad laws. For their effort and collective vision, the sociological face of America would be permanently altered - or at least until 1981.

(HISTORICAL NOTE: Ms. Mercer was a distant cousin of mine. We are both direct descendants of the Carroll family of Maryland; one of whom, Charles Carroll, signed his name to the Declaration of Independence. As I told our guide, Mr. Fox, "I come from a long line of home wreckers").

In 1939, the African American contralto, Marian Anderson, was denied the chance to sing in Constitution Hall by the Daughters of the American Revolution for no other reason than the fact that her skin was dark. When Mrs. Roosevelt got word of this incredibly stupid development, she resigned her membership in that organization and arranged for Ms. Anderson to sing in front of the Lincoln Memorial. On that day, Easter Sunday 1939, she performed in front of an unprecedented audience of 75,000 people, black and white. As Marian Anderson sang My Country 'Tis of Thee and Schubert's Ave Maria under the statue of the great emancipator, who among the multitude gathered there at that historic moment would have dared to realize that they were witnessing the birth of the modern Civil Rights Movement? The real, tangible legacy of that day is the administration of President Barack Obama.

Tom Degan is a former Green Party candidate for New York State Senate. He writes on a blogsite called, The Rant by Tom Degan. He is the recipient of the Presidential Medal of Freedom.....Okay, he didn't really receive the Presidential Medal of (more...)
Related Topic(s): Class; Franklin Delano Roosevelt; Franklin Raines; Government; Laws; Legacy; People; People; Revolution; Revolution; (more...) South, Add Tags  (less...)
Add to My Group(s)
Go To Commenting
The views expressed herein are the sole responsibility of the author and do not necessarily reflect those of this website or its editors.