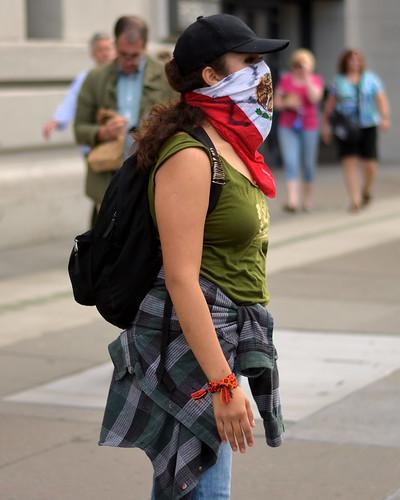 Walking into the tiny convenience store at my local filling station, a small child shouts: "You're a cowboy!!" and runs behind someone's legs, peeking out, grinning. The proprietor: "Ya can't fool me behind that mask," chuckling. My hat and scarf, leaving no skin exposed, do look sort of costume-y.

There are about five people in the dank space. There is no place six feet apart from anyone else. Nobody but me is masked or gloved.

I have put on two sets of vinyl gloves, not quite what I would want, but we had them left over in the kitchen. Two sets, because you can strip off the outer layer and replace it without contaminating the inner one. My bank card was in my outer coat pocket, and seems to withstand washing with dish detergent, and a wet-wipe. My scarf will have to do for a mask, for now. Better than nothing. My glasses are large, as it happens, and that helps quite a lot. I would wear construction goggles if I didn't already need prescription lenses.

When I get home, I usually strip and shower immediately, observing old habits from my days in surgical operating rooms. That was the early 1970s, but the Germ Theory has held up, at least for people who give Science a little credit.

And there's the rub.

My gas station people are my neighbors. When the storm hit a few years ago, we were all mucking out the place, after the river out back returned to its banks. We've been through a few disasters together over the years. The community really is a community.

But. Walking into that little store today was shocking. I know a lot of my neighbors have very different political views from me. But I really had not realized how Science had been converted into an ideological thing.

People who don't believe Science, and are ardent about gun "rights," puzzle me no end. The ones I know fairly well have those two ideas compacted together like the block out of a car-crusher, into one political viewpoint. What's up with that?

So it can't be Science they question. There has to be another category of knowledge above that, in their world. It's not what is said, but who says it, which is not all that strange; but somehow, credibility is bestowed on people in some strange and arbitrary way.

To grant somebody authority has never required scrutinizing their college degree. A person with a stethoscope draped across their shoulders, in a lab coat, inside a medical office, can say things to you about your most private concerns, and even offer you powerful drugs, and you take it graciously, if you want to live. But not if they're wearing a backwards baseball hat and toting a skateboard. But now that's changed, too.

I think, judging from what the new authorities in our world seem to have in common, that it's people whose faces appear on screens while they're talking.

And that's all it takes. They could be Charlie Manson. Just as long as they talk on a screen somebody will "Like" them and "Follow" them. And in the case of at least that particular homicidal narcissist, it's why we lock them away and keep them off our screens.

I mean, who you gonna believe: somebody you've known for decades, given credit for groceries, who has stood with you in hard times? Whose family is full of medical professionals, and has shown good common sense as long as you've known them? Who supported your small business when it was more expensive than the big chain store up the road? Or an image on your screens telling you Science is all a hoax to take away your guns and kill the unborn?

Talk show hosts, rockstars, "reality" TV hosts. And perhaps, people who are famous for having more money than fully half the rest of the people on earth put together. And maybe just anybody whose job is being famous.

Related Topic(s): Community; Disasters; Family; Heroes; Hoax; Information; Justice; Language; Medical; Neighbor; (more...) Power; Reality; Science; Truth, Add Tags  (less...)
Add to My Group(s)
Go To Commenting
The views expressed herein are the sole responsibility of the author and do not necessarily reflect those of this website or its editors.