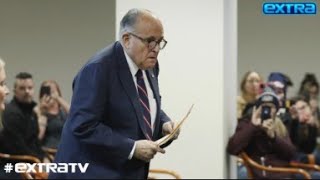 Doctor Weighs In on Rudy Giuliani's COVID-19 Case Extra's. Billy Bush sat down with Dr. Armand Dorian to discuss the latest COVID-19 headlines. Dr. Dorian, who has not treated Rudy Giuliani, weighed in on his ...
(Image by YouTube, Channel: extratv)   Details   DMCA

"Hallelujah!" Scream millions on Facebook and Twitter. Also, "Karma;" "Serves him right;" "He probably spread it over half the country;" "Stupid spreader;" and, "I don't wish anybody dead, but ..."

How far the mighty have fallen. How sad the daily sight of the one-time "America's Mayor" making a fool of himself in court and anywhere he can arrange an audience in public in order to symbolically and delusionally prostrate himself at the feet of a man who doesn't care about him and who will never pay his legal fees.

And all without a mask. Everywhere. Pennsylvania, Georgia, Michigan, Arizona, the White House. Rudy's got it. Jenna Ellis, one of his equally delusional "co-counsels," has it as well. Where'd they get it? Who knows? Who'd they give it to? No idea. No contact tracing as well as no social distancing.

What is it with Americans--especially a lot of Republicans--who won't wear a mask? It's the easiest and best way to prevent the spread of the coronavirus, along with proper social distancing. If everybody does it, fewer people get it, fewer people die, the sooner we can go back to work and we don't have to wear masks. That's not even new math. It's just common sense and decency.

We're approaching 300,000 dead from COVID-19 in this country, a great many of those deaths the result of a total lack of planning and caring by the Trump administration. Criminal negligence writ large. Trump doesn't care anymore. He's focused on raising as much money as he can with his phony "the election was rigged" campaign. The one Rudy was in charge of until he got COVID. Inconvenient.

Also embarrassing: The world found out about Rudy and COVID in a tweet from Trump. It's a surprise the news didn't get lost in that Twitter chaos.

It's hard to know what happened to Rudy. He took his 9/11 fame and prominence, conducted a half-hearted campaign for president a while back, then apparently decided to be a lackey and legal errand boy for Donald Trump, a job with great visibility and occasional perks, until you cross him. Spread the conspiracy theories. Make up new ones every day. Ukraine today, Philadelphia tomorrow.

And whatever you do, don't wear a mask. Not because there is no COVID. We know there's a virus Trump even got it but because we can't let all those people coming to our rallies know that it's real. We can't let them know that we ignored it and let tens of thousands of people die. We don't wear masks whatever Fauci says. We were robbed! Help us fight it! Give us money! Don't wear a mask! Only liberals, Democrats, socialists, communists and coastal elites wear masks! Real Americans don't wear masks!

So Rudy's got COVID. I don't wish him dead, but a little suffering might be good for him.

Once upon a time I might've started this column by writing, "Rudolph Giuliani, lawyer for President Donald Trump, has contracted the COVID-19 virus. The former New York City mayor apparently was exposed to the virus in the midst of his last-minute campaign to overthrow the results of the 2020 presidential election, which was won by Joe Biden."

But I spent four decades writing for tabloid newspapers and when a once-prominent political figure makes a fool of himself on a daily basis that boils down to, "Rudy got COVID." In bold type. He's got the notoriety, but no longer the respect. He didn't wear a mask.