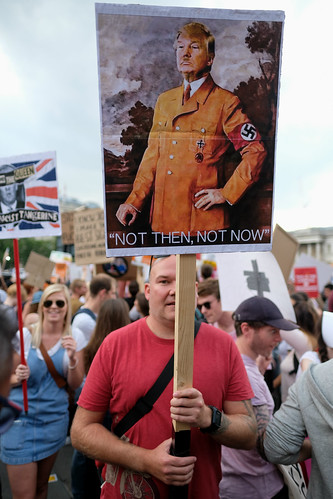 As JFK might have said, "Wir sind heute alle Deutsche aus den 1930er Jahren" We are all 1930s Germans today."

A friend who is a recently naturalized citizen asked me the significance of the election today. I replied that we are all 1930's Germans. In the 1930's, Germans enabled Adolph Hitler to reach and consolidate his power.

Americans face a similar situation today. It's not just Trump, the malignant narcissist, fascist authoritarian who has repeatedly expressed his envy of and admiration for the worst fascist authoritarian leaders around the world. America faces a corporatized structural system that has taken control of all three branches of government, using, as a primary means, voter disenfranchisement.

If you are usually a far left voter for Greens, this is not the time to vote that way. If you are a lifetime Republican, this is not the time to maintain that tradition. If you are a Libertarian, this is the time to lean towards the liberal, social side of your ideology. If you don't believe that voting makes a difference, wake up. If you've been saying, "give Trump a chance," it's time to face the reality that he is the worst, most dangerous president in the history of the United States. Even Fox News refused to run the racist ad he advocated.

This election is the most important election in modern history. Don't make the mistake the Germans made in the 1930s. Vote to take the power away from Trump and his supporters. The Democrats are a big, a huge problem. But this election will include many people who didn't take corporate money, and they will bring independence to the party and WE will force the Democratic party to embrace them as the new generation of leaders.

Related Topic(s): Corporate Fascism; Donald Trump; Fascism; Fascism-Cant Happen Here; German Election; Hitler, Add Tags
Add to My Group(s)
Go To Commenting
The views expressed herein are the sole responsibility of the author and do not necessarily reflect those of this website or its editors.