In this election year, what is the biggest foreign policy challenge in our dangerous world?

Many voters would say the deadly threat from ISIS, al Qaeda and other terrorists. Others would point to a resurgent Iran, an unstable Syria and Iraq, or an aggressive Vladimir Putin. Certainly, these all pose serious risks to our national security.

But few are talking at this point about the greatest challenge of all: establishing a just and lasting peace in the Middle East between Israel and the Palestinian Authority.

No diplomatic achievement would benefit America more than negotiating a two-state solution so Israel and Palestine can exist side by side in peace and security. Such an agreement would improve our relationships with the Muslim world and dispel much of the hatred directed our way. It would bolster our national security, bring peace to a volatile region, protect Israel, and keep faith with democratic principles for all peoples. 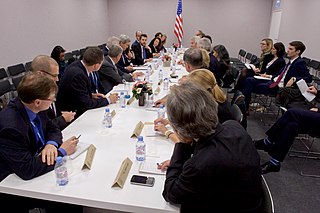 Peace between Israel and the Palestinians is the critical step needed to strengthen our standing around the world.

Violence and discord are growing in Israel and the West Bank. Palestinian extremists are committing despicable acts of terror against innocent Israeli citizens. The Israeli government is building illegal settlements in the West Bank and the Israeli army is demolishing Palestinian homes. The situation is growing gravely worse.

But no American presidential candidate is highlighting a plan to bring Israel and the Palestinian Authority back to the bargaining table. While the Democratic candidates favor our long-standing and bi-partisan commitment to a two-state solution, it is not part of the campaign debate. None of the Republicans even mention it on their campaign websites.

All the candidates for president should be calling for renewed negotiations - Camp David III - while committing themselves to personally lead the peace talks between Israelis and Palestinians in 2017.

Joseph Hoeffel is a former Congressman from Pennsylvania who served in the House of Representatives from 1999-2004. He has also served as a state representative and a county commissioner. He is the author of "The Iraq Lie: How the White House (more...)

Related Topic(s): Agreement; Camp David Summit; Israel; Negotiation; Palestinian; Peace, Add Tags
Add to My Group(s)
Go To Commenting
The views expressed herein are the sole responsibility of the author and do not necessarily reflect those of this website or its editors.