This week in the United States, the impeachment hearings made clear that President Trump abused his office and committed a crime against the Constitution. Not only did he attempt to pressure the Ukrainian government into investigating his presidential political rival Joe Biden and his son Hunter Biden in exchange for military aid, Trump also used the power of his administration to pressure loyal followers, such as Rudy Giuliani (his personal lawyer) to claim that Ukraine, not Russia, had intervened in the 2016 election a position completely debunked by every U.S. government intelligence agency.

In addition, Trump once again displayed his disregard for the law and the separation of powers by refusing to cooperate with the House impeachment inquiry, claiming that the evidence pointing to his use of power to secure political favors from the Ukrainian government was fake news and amounted to nothing more than a witch hunt. Moreover, he escalated his contempt for the proceedings by conducting a smear campaign against investigators leading the hearings by calling them "human scum." And he threatened Marie L. Yovanovitch, the former ambassador to Ukraine, who criticized Trump's policies with Ukraine, and derided media outlets that critically covered the event.

At the same time, Trump made clear his disdain for any viable notion of justice by pardoning three American servicemen accused of war crimes. There is more at stake here than simply a president's abuse of office for political gain and his authoritarian embrace of unaccountable power and a shameful disregard for the law. Trump has launched a direct attack on the ideological, institutional and ethical foundations central to the functioning of a democracy. 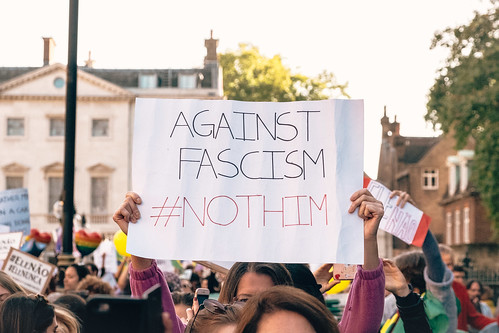 Meanwhile, in Brazil, President Jair Bolsonaro has repeatedly attacked Indigenous groups working to protect the environment from illegal loggers and from lawbreaking networks that are driving the destruction of the Amazon. In doing so he has given a green light to groups that are illegally pillaging the rainforest and threatening to kill Indigenous people, small farmers, law enforcement agents and anyone else who tries to stop them. Exhibiting a Trump-like embrace of solipsism, the spectacle of distraction, and a penchant for political absurdity, Bolsonaro has falsely accused actor Leonardo DiCaprio "of bankrolling the deliberate incineration of the Amazon rainforest" and praised Augusto Pinochet's military coup in Chile in 1973. Unsurprisingly, Bolsonaro has also expressed his support for Brazil's 1964-1985 military dictatorship on a number of occasions. And when faced with opposition, he draws from the Trump playbook by producing scapegoats.

Resistance to the emboldened authoritarianism of Bolsonaro's government is growing in Brazil, however, especially with the release from prison of former president Luiz Ina'cio Lula da Silva. Protests are occurring daily in the streets of Brazil, though not on the scale in which they are taking place in Colombia, Bolivia, Chile and Ecuador, and in spite of accelerating state repression. The massive protests that have occurred in Bolivia, Chile, Colombia and Ecuador have been met with violent police abuse and state repression.

These events may seem unrelated, but in fact they are part of intertwined trends that are transforming the political landscape across the globe. These movements of resistance represent a reaction to the multiple abuses produced by a mix of political authoritarianism and neoliberalism marked by cruel predatory policies, a disdain for human rights, and fascist claims to ultra-nationalism and social cleansing. In Chile, Bolivia, Colombia and other Latin American countries, people are organizing against a neoliberal system that denies meaningful health care, a decent pension system, quality education, public transportation, investment in public goods, and social mobility to the underclass of people deemed as disposable. In countries such as Hong Kong, the United States and Brazil, there are growing movements for democratic rights, solidarity and economic equality. In this instance, resistance movements share the struggle for combining struggles for economic equality, social justice and minority rights.

These movements, which are engaging in massive forms of collective resistance, are aiming to destroy the structures and ideological plague of neoliberal global capitalism, with its relentless attacks on public goods, unions, social provisions and the ecosystem, as well as its relentless drive to privatize everything and turn all social relations into commercial transactions.

Taken together, these two movements are confronting the interrelated and mutually compatible demons of neoliberalism and fascist politics. Moreover, both movements are predicated on the need to engage the role of the symbolic as a political site where politics can be rethought and collective strategies can emerge.

Toward a Politics and Pedagogy of Everyday Life

Pedagogy as a politics of persuasion, identity formation and resistance offers up the opportunity for such movements to speak to a vision that addresses the core values of justice, equality and solidarity while taking on economic inequality, corporate power and racial injustice. Rather than talk in abstractions about freedom, equality and justice, it is crucial for radical political movements to frame their language in relation to the everyday experiences and problems that people face. For instance, it is important for radical social movements to fashion a language that resonates politically and emotionally with peoples' needs, values and everyday social relations while embracing the core values of equality, freedom, solidarity and justice. Leah Hunt-Hendrix points to the importance of addressing such core values in the U.S. She writes:

Millions of Americans, whether they're people of color, white, immigrants; whether they live in cities, suburbs, small towns or the country; whether they're Republicans, Democrats, independents, voters or non-voters living in poverty or struggling to make it from paycheck to paycheck. Millions are unemployed or underemployed, choosing between health care, heat or housing. Many more feel like they're slipping behind and lack the economic security they once had.

At the same time, movements in Chile, Colombia and Ecuador are mobilizing against the twin evils of neoliberalism and fascism, and are demonstrating the need to address the cultural forces shaping society. Such forces are viewed as constitutive of the very nature of politics and modes of agency that both repress progressive alternatives and make them possible. Such movements are not only addressing the educative nature of neoliberal politics, but creating the theoretical and pedagogical groundwork for giving people the tools for understanding how everyday troubles connect to wider structures of domination. This pedagogy of resistance is critical of the attack on notions of the democratic imagination, redemptive notions of the social, and the institutions and formative cultures that make such communities, public goods and modes of solidarity possible. A radical pedagogy in this instance functions to break through the fog of manufactured ignorance in order to reveal the workings and effects of oppressive and unequal relations of power. Pedagogy as a tool of resistance opens up a space of translation, critique and resistance.

One reason the movements in Chile, Colombia and Ecuador have gained momentum is through their successful resistance to the atomization that isolates individuals and encourages a sense of powerlessness by claiming the existing order cannot be changed. They have at times succeeded in countering this atomization by refusing what Robert Jay Lifton in a different context calls a "malignant normality." That is, the imposition of "destructive versions of reality" and the insistence "that they are the routine and the norm."

This is particularly crucial because atomization is one of the conditions that make oppressive regimes possible. In order to dismantle these regimes, we must also find a way to break out of the patterns of atomization that enable them.

Related Topic(s): Backlash; Fascism Has Happened Here; Isolation; Pedagogy; Politics; Resistance; Solidarity, Add Tags
Add to My Group(s)
Go To Commenting
The views expressed herein are the sole responsibility of the author and do not necessarily reflect those of this website or its editors.