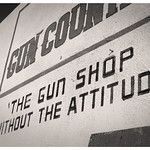 The Gun Shop Without the Attitude
(Image by eliztesch)   Details   DMCA

It is not America's gun laws that are the issue when it comes to the mass shootings which occur with banal regularity in the land of the free, it is the gun culture that underpins those laws -- a culture symptomatic of the moral sickness the country is suffering from, and for which in 2017 there appears no sign of a cure.

In the wake of the latest mass shooting to erupt in the US, this one at an open-air music festival in Las Vegas -- during which 59 people were killed and hundreds more wounded by lone gunman Stephen Paddock, spraying automatic gunfire into the crowd from the window of a room overlooking the event at the Mandalay Bay Hotel -- the same debate over America's notorious gun laws has ensued, involving the usual parade of fulminating defenders of the country's "sacred" Second Amendment of the US Constitution, enshrining the right of citizens to bear arms.

Said supporters of this provision within the country's constitution, adopted and ratified in 1791 at a time when automatic and semi-automatic weapons were still centuries away from being invented, have in time honored fashion been extending themselves in arguing that freedom in America means the freedom to be able to walk into a gun store on any given day and procure enough firepower to wipe out a herd of elephants.

But as mentioned, the question is not over the rights or wrongs of the Second Amendment; the question is the culture of violence married to the near total lack of social cohesion that pervades in a country suffocating under the weight of its own nauseating hypocrisy. This culture and this lack of social cohesion are the underlying causes of the mass shootings and massacres that are so ubiquitous in America that they have become part of the cultural fabric, just like the Superbowl and Kim Kardashian's t*ts.

The sentiments of former right wing TV host Bill O'Reilly, who described this latest atrocity as the "price of freedom," while clearly outlandish and utterly contemptible to anyone who's managed to retain a semblance of sanity, are nonetheless evidence of the mass psychosis that passes for normality in large swathes of America.

In penetrating the foundational myths by which the US sustains itself -- rugged individualism, self reliance, the apotheosis of private property and personal wealth, seasoned with Old Testament virtues of work, self discipline, and the exaltation of "righteous" violence -- we come face to face with an ugly and suppurating reality in the form of the widespread atomization of society, white supremacy, along with a pervasive yet irrational fear of central government, fuelled by conspiracy theory. Add to this lethal cocktail the grotesque sense of exceptionalism which informs the country's political culture, an entertainment industry and celebrity culture that distorts the true measure of human worth and meaning with its worship of obscene wealth and fame, and you are talking a society coming apart at the seams.

Is it any wonder that mental illness is so ubiquitous in a society in which rapacious competitiveness and a religious attachment to acquisition has reduced the lived experience of the majority of its citizens to one of unremitting pressure not only to succeed but for far too many just to survive? On the other side of this dismal equation sits a healthcare system which attests to the core inhumanity that no amount of boasts of America's innate goodness and promise could possibly elide, providing the ingredients that go into producing mass killers such as Stephen Paddock.

The gun culture in America is also central to law enforcement. The inordinate number of people killed by cops across the country on a regular basis is less to do with trigger-happy police officers in fear of their lives committing catastrophic and fatal errors, and more to do with an ethos of vigilantism born of the dehumanization of the poor and/or of minorities, who make up the vast majority of victims of cop violence across the country. Indeed, in this respect, things have got to the point where within US law enforcement it seems that executing young black males, regardless of whether they happened to be armed or unarmed, has become more acceptable than "protecting and serving."

Analyzing this perverse exaltation of violence in America, author and journalist Chris Hedges writes, "Vigilantes and lone avengers are the popular heroes in American culture. They are celebrated on television and in Hollywood movies. Audiences, especially as they feel economic and political power slipping from their hands, yearn for the violent authority embodied in rogue cops in films such as Dirty Harry or in unrepentant killers such as Bradley Cooper in American Sniper."

America's exaltation of violence is likewise reflected in a muscular and aggressive foreign policy that has been responsible for the deaths of more people around the world since the end of the Second World War. Thus, when black civil rights leader Dr Martin Luther King, himself assassinated by a crazed lone gunman, described the US government as the "greatest purveyor of violence in the world," he never spoke a truer word. They are words attested to by the dropping of nuclear bombs on Hiroshima and Nagasaki in Japan, the destruction of North Korea, Vietnam, Afghanistan, Iraq and Libya, and not forgetting the countless proxy wars it has funded in Central and South America, and the Middle East.

So, yes, we are dealing with a culture in which the capacity for unleashing lethal violence on a mass scale is lauded in movies and on television, in which the veneration of tough cops and the glorification of the military are consonant with the dehumanization of the poor and minorities, and in which the Second Amendment is treated as if the very suggestion it should be reformed is considered sacrilege.

It is why in 2017 the biggest threat to the average American citizen is not North Korea, Russia, or Iran -- is not even terrorism -- but instead is the organization which exists to protect the right to bear arms, an organization whose money and political influence has succeeded in blocking even the most incremental change to the nation's gun laws.

That organization is the National Rifle Association, more commonly referred to as the NRA. It is an organization which in a very real sense is dripping in the blood of the 59 victims of this latest mass shooting in Las Vegas, along with that of the countless tens of thousands of victims of gun violence all across America.

Stephen Paddock is neither the moral nor cultural aberration defenders of the Second Amendment assert. In fact, the country's history is littered with countless thousands of Stephen Paddocks, unleashing wanton slaughter against native Americans, blacks, and the poor, evidence that the true history of America is a history of psychopathic violence buttressed by the salve of a bible in whose name the crimes that have and continue to be committed are legion.

We have met the enemy and he is us.

John Wight is the author of a politically incorrect and irreverent Hollywood memoir -- Dreams That Die -- published by Zero Books. He's also written five novels, which are (more...)
Related Topic(s): America; NRA; Rights; Shootings; Violence, Add Tags
Add to My Group(s)
Go To Commenting
The views expressed herein are the sole responsibility of the author and do not necessarily reflect those of this website or its editors.