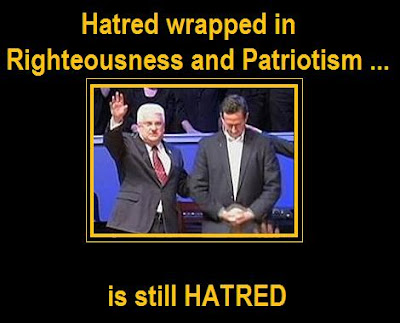 Barack Obama had his Jeremiah Wright. John McCain had his John  Hagee  (and Rod Parsley). Rick Perry had his... Rick Perry. Now Rick  Santorum  has his Dennis Terry.

In a diatribe against "liberals," Buddhists and Muslims (and by extension, all other political beliefs and religious faiths), Rev. Dennis Terry introduced Rick  Santorum  and told all of the imagined enemies of America to "Get out!" And while other religious leaders have voiced similar "Christian only" sentiments, it was Terry's vehemence that shook the country. It was a vehemence that laid raw hatred at  everyone's  feet.

Now Dennis Terry is trying to tell people that the video was "edited" and his comments "twisted." He is about love, after all, as all Christian are taught to love their brothers, even their enemies.

Just as David Barton revises American history to prove that America was founded as a totally Christian Nation, Terry is revising his own statements and actions right before our eyes (see both videos below). If it weren't so mind-numbingly disingenuous, his response to the  blowback  would be considered very low comedy.*

The hate-love back-peddling and specious reasoning is all around us, albeit in slightly different forms. Take, for example, Pastor Steven Anderson, who's strip mall church received national notoriety when he called for the death of Obama. When his Faithful Word Baptist Church was listed as a hate group by the  SPLC  (because of extreme homophobic sentiments), he retorted:

"Am I all about hate? No I'm sure I'm more about love than I am hate," Anderson said. "I do hate homosexuals and if hating homosexuals makes our church a hate group then that's what we are."

The church leader, with a Bible in his hand during the interview, said he preaches his hatred for homosexuals and wishes death upon them.

That's the reason we oppose the normalization of homosexuality, it's not because we don't like homosexuals it's because we love them. I mean listen to me, if you love people, if you care about people, if they matter to you, their well-being is important to you, do you want to encourage them, do you want to support a lifestyle, do you want to subsidize and reward and provide special legal protections for behavior that's gonna make them more likely to experience depression, suicidal  ideation , homelessness and domestic violence?

Disseminating false information is one way to get you listed as a hate group by the  SPLC : depression and suicide are caused by he pressures of moralizers like Bryan Fischer, homelessness exists mostly for gay teens kicked out of their homes and domestic violence in gay households is so far below the national average as to be comparatively non-existent.

Assumptions, purposely skewed reasoning, and generalizations are the stock-in-trade of people like Anderson, Fischer...and Terry:

1. People do not worship Buddha in the same sense they would worship God. Buddha is NOT a god.

2. The same goes for Muslims "worshiping" Mohammed. Mohammed is a  prophet, a messenger.

3.For all the pronouncements of David Barton, the America-was-founded-as-a-Christian-nation meme has never held water with reputable historians.

4. Not all liberals are "naysayers" and unpatriotic. It has even been argued that people who criticize their own country are, in a sense, more patriotic than their flag-waving compatriots.

5. "Get Out!" means just that: Terry wants people to leave who disagree with him.

6. Allah is the same God as the God of Abraham, Isaac and Jacob. That's why it is called an Abrahamic religion. Islam reveres the Old Testament of the Bible and Muslims are taught to respect Jesus as a prophet.

Rev. Dan Vojir is has been writing/blogging on religion and politics for the better part of ten years. A former radio talk show host (Strictly Books " Talk America Radio Network) and book publisher, Dan has connected with some of the most (more...)
Related Topic(s): Buddhist; Hate Groups; Hate Speech; Liberals; Love; Love The Sinner; Muslim World; Pastor Dennis Terry; Revisionism; Santorum Rick; (more...) Tony Perkins, Add Tags  (less...)
Add to My Group(s)
Go To Commenting
The views expressed herein are the sole responsibility of the author and do not necessarily reflect those of this website or its editors.