I've always had a problem with the phrase, "It's the Christian thing to do." Somehow I always imagine it being said with a slight air of contempt. It's always said by self-righteous old ladies (English ladies, to be sure) with their noses firmly pointed towards the sky and their eyes looking down at their underlings. To me, it is the most insufferably arrogant phrase in our very difficult, but very precise language and it conveys to the listener that the person saying it, like others of his or her ilk, have a corner on goodness.

So in the midst of the furor brought about by the Cordoba Center ("Ground Zero Mosque"), I'm wondering when the phrase will be uttered. Oh, it's been bandied about in several ways by that paragon of Christofascism, Bryan Fischer (he of the SPLC-listed hate group, American Family Association), but not with anything even resembling compassion, even condescending compassion. (He said that deporting all Muslims would be "compassionate" but he couldn't be heard thereafter above the laughter).

The Christofascists will certainly have a difficult go of it: the closest they can come to "the Christian thing to do" is to tolerate the building of the Center, but they won't do that since they've been demonizing Muslims so long it would be totally out of character. So here is an instance where "the Christian thing to do," becomes different than "the American thing to do." Again, a stumbling block, but one which Christofascists are certainly more experienced in handling. For years, Christofascists have made equal rights for gays "unAmerican" in their circuitous reasoning, so they will somehow turn the freedom of religion for Muslims into an attack on America's principles. Don't ask me how they will do it, but there will be ads/billboards demonizing Islam and Muslims. Maybe they'll cling to that imaginary string (a leftover from some Southern Baptist minister's sermon) that Islam is not really a religion, but a cult of bloodthirsty thugs. And when they get through demonizing, we'll be glad if the KKK moves in on the spot.

Forget the "insensitivity" issue. It's dead. In it's place will come "evil." Christofascists will talk of evil more than any thing else from now on. They have to use force. Maybe force will be "the Christian thing to do."

Now the GOP has chimed in and said it will definitely make the GZM a talking point in midterm elections. Why? Is it necessary for politicians to take a stance at all? To Christofascists across the country it definitely is, because involving politicians only lends credibility to their stance: more politicians on their side is the "American" bridge they need. It will be "the American thing to do."

Rob Kall of OpEdNews had an interesting take on the situation:

The world we live is no longer so simple, so small that we can speak to one group and assume another group will now know what we've said. It hasn't been for a long time. Yet this is how the opponents of the Cordoba building, which is not being built on Ground Zero, are acting. They need to come out of their caves and wake up to the reality that their small, bigoted response does not stand the smell test, when they claim failed Muslim "sensitivity." On the contrary, their own sensitivity to the threat to America is the problem.

I will agree that Christofascists are zenophobic because they realize the wisdom of taking on one country at a time, but Kall is wrong if he thinks that they will ever "come out of their caves." Many of those "caves" are Fundamentalist congregations owned by the new "Christian" leaders like Tony Perkins, Rick Warren, Rod Parsley and Lou Engle. And if they come out at all, it will be too late.

America's pop religious icons are coming very close to expelling Muslims altogether, from jobs, from homes, from America. And they will somehow manage to take Bryan Fischer's "compassion" and fashion it into one big, righteous package: "It's the Christian AND American thing to do." I don't know exactly how or when (or who), but someone like Tony Perkins will re-enact Queen Isabella's expulsion of Muslims and Jews from Spain which, being the "Christian thing to do" allowed people to keep their lives in some warped worldview of compassion and humanity. And of course, it won't be "nice" just "Christian." 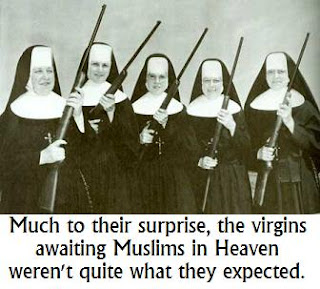 Rev. Dan Vojir is has been writing/blogging on religion and politics for the better part of ten years. A former radio talk show host (Strictly Books " Talk America Radio Network) and book publisher, Dan has connected with some of the most (more...)
Related Topic(s): American Family Association; American Muslims; Bryan Fischer; Christians Only; Christofascists; Cordoba Center; Ground Zero Mosque; Islam; Islamaphobia; OpEdNews; (more...) Religious Persecution; Rob Kall Radio Show; Southern Baptist Convention, Add Tags  (less...)
Add to My Group(s)
Go To Commenting
The views expressed herein are the sole responsibility of the author and do not necessarily reflect those of this website or its editors.