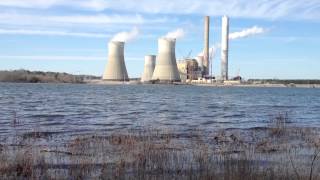 We must embrace a despair that unflinchingly acknowledges the bleak future that will be created by climate change. We must see in any act of resistance, even if it appears futile, a moral victory. African-Americans understand, in a way perhaps only the oppressed can grasp, that our character and dignity will be measured by our ability to name and resist the malignant forces that seem to hold us in a death grip. Catastrophic climate change is inevitable. Our technology and science will not save us. The future of humanity is now in peril. At best, we can mitigate the crisis. We cannot avert it. We are fighting for our lives. If we do not rapidly build militant movements of sustained revolt, movements willing to break the law and attack the structures of the corporate state, we will join the 99.9 percent of species that have vanished since life first appeared on earth.

"In these circumstances refusing to accept that we face a very unpleasant future becomes perverse," Clive Hamilton writes in "Requiem for a Species." "Denial requires a willful misreading of the science, a romantic view of the ability of political institutions to respond, or faith in divine intervention."

Tens of millions of human beings, especially in the global south, are being herded into the climate furnaces for immolation. And we in the north are soon to follow. The earth's temperature has already risen by more than 1 degree Celsius since the late 19th century. And it is almost certain to rise a few more degrees -- even if we stop all carbon emissions today. The last time the earth's temperature rose 4 degrees, the polar ice caps disappeared and the seas were hundreds of feet above their current levels.

"[Climate change] is interacting with two previously existing crises," Christian Parenti, author of "Tropic of Chaos: Climate Change and the New Geography of Violence," told me in an interview. "On the one hand, the legacy of neoliberal economic restructuring has weakened states in the global south so they don't have the capacity to pave the roads, educate the population, to help farmers who are in distress. On the other hand, much of the global south is littered with cheap weapons and veterans of previous conflicts who know how to use those cheap weapons. In this comes the extreme weather of climate change. [In] states that have been systematically reduced to the point where they can't respond even if they wanted to, how do people adapt to climate change? How do they adapt to the drought and floods? Very often, you pick up surplus weaponry. You go after your neighbor's cattle. Or you blame it on your neighbor's ideology or ethnicity. Underneath a lot of these ethnic and religious conflicts we see there is a climate element."

"The great danger in climate change is that at a certain point [you will see] the collapse of natural ecosystems, the dying of tropical forests, which are currently carbon sinks -- they pull CO2 out of the atmosphere," Parenti said. "But if they die and all that wood burns or rots, they can become net emitters of greenhouse gases. There are the huge deposits of methane, frozen methane in the Arctic. These are already beginning to come out."

"The fear is that at a certain point we cross the line and there's a tipping point," he said. "The primary cause of greenhouse gas emissions will become the breakdown of these natural systems, and then it really is out of our control."

We have the technology to build alternative energy and food systems, but the fossil fuel industry, the most powerful industry in the world, has blocked all meaningful attempts to curb fossil fuel extraction and reduce energy consumption. And meat, dairy and egg producers, responding to consumer demand, are responsible for the emission of more greenhouse gases than the entire global transportation sector. Livestock generates enormous amounts of methane, which is 86 times more destructive than CO2. Livestock also produces 65 percent of nitrous oxide resulting from human activity, a gas that has 296 times the "Global Warming Potential" of carbon dioxide. The massive animal agriculture industry, like the fossil fuel industry, receives billions of dollars in subsidies from the U.S. government. And corrupt and pliant politicians who do the bidding of these industries receive millions in return from lobbyists. It is legalized bribery. And it won't stop until this political system is destroyed.

The nonprofit Project Drawdown, which compiles research from an international coalition of scientists, says that "a plant-based diet may be the most effective way an individual can stop climate change." Adopting such a diet should be our first act of revolt. The second should be carrying out civil disobedience to disrupt the extraction of fossil fuels, along with massively reducing our consumption of those fuels. The third, through mass mobilization, should be to overthrow the corporate state and nationalize the energy sector, the banking industry, utilities and public transportation in addition to dismantling a war machine that in waging futile and unwinnable wars consumes nearly half of all government expenditures. It is a lot to demand. But if we do not succeed, the human race will disappear.

Governments, if they were instruments of the common good, would end subsidies to the fossil fuel and animal agriculture industries, retrofit government vehicles and buildings to use clean energy, ban the fossil fuel and animal agriculture industries from public lands, end the externalization of the true costs of these industries, and impose taxes so heavy that extraction of fossil fuels would be unprofitable and the purchase of animal food products economically unsustainable -- just as those foods are environmentally unsustainable. But with state power being held captive by corporations, short-term profit takes precedence over human health and even human survival.

"The technology exists to strip CO2 out of the atmosphere," Parenti said. "The problem is it's extremely expensive. And how do you store it? As a gas, it can leak out. But it can also be turned into basically baking soda. But the costs are so expensive. So this technology currently exists. It's proprietary. Private companies are using it to facilitate further oil extraction. If civilization was serious about survival, governments will seize or buy that technology. Make it open source. And invest in whatever was necessary to strip CO2 out of the atmosphere artificially, along with [extraction by] plants and forests etcetera."

Parenti stressed that collapse will be defined not only by rising temperatures but a series of social and infrastructure failures. It will be nonlinear. He noted that food prices, including the prices for basic grains, surged shortly before the 2010-2013 uprisings known as the Arab Spring.

"You had the Black Sea drought, affecting grain harvest in Russia, Ukraine and Kazakhstan," he said. "This ripples through world markets. Bread prices spike in Tunisia and Egypt. People are out in the street protesting this mukhabarat [secret police] state they've lived in for 30 years. But it's also about the price of bread. That's one way that a climate crisis appears. It doesn't appear like a climate crisis at first. You have to think about the interconnections of the world economy."

The civil war in Syria was preceded in 2006 by the worst drought in 900 years, as well as an austerity program that weakened government support systems. Farmlands were transformed into arid dust bowls. Livestock perished. Food prices skyrocketed. Over 1.5 million desperate people from the countryside fled to urban areas, many packing themselves into the shantytowns and slums set up by refugees during the war in Iraq. And into the chaos walked Islamic State. The war, which has taken half a million lives, created 4.8 million refugees and internally displaced 7 million people in Syria. The refugee crisis that resulted in Europe is the worst since the end of World War II. The influx to Europe has empowered nationalist and protofascist movements and touched off a rise in hate crimes. Climate change is the unseen hand in unrest, social disintegration, chaos and war.

"At one level, this is a war about ethnicity and religion and opposing the foreign occupation," Parenti said of the war in Afghanistan. "But on another level, this is about farmers who are dealing with the worst drought in living memory, which is occasionally punctuated by extreme flooding, growing the only crop they can grow in those conditions -- [heroin] poppies. The poppy happens to use about one-fifth or one-sixth the amount of water that wheat and other traditional Afghan crops use. So farmers have to grow poppy if they're going to survive. Which side of the conflict will help them do that? The Taliban. There are subtle and important interconnections to all ongoing conflicts."

Related Topic(s): Climate Change Protest Activism; Decline; Illusion; Politics; Survival, Add Tags
Add to My Group(s)
Go To Commenting
The views expressed herein are the sole responsibility of the author and do not necessarily reflect those of this website or its editors.