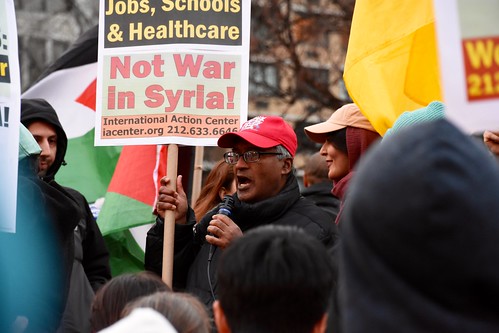 The US war against Syria was one that people almost stopped. President Obama was unable to get Congress to authorize the war in 2013, but the Pentagon and foreign policy establishment, who have long wanted to control Syria, pushed forward with war anyway.

The people were right, and the military was wrong. The war on Syria never should have happened and now must end.

President Trump announced withdrawal from Syria this week. This creates an opportunity to end the war on Syria. We have work to do to make peace a reality.

The People Almost Prevented the US War in Syria

In 2013, amidst highly-doubted, unproven allegations of a chemical attack by Syrian President Assad (debunked a year later), the threat of war escalated, and so did opposition to the war. Protests against an attack on Syria took place around the world. In the the US, people were in the streets, and speaking out at town halls. Obama was forced to bring the issue to Congress for authorization.

Congress was barraged with a Peace Insurrection encamped outside its doors, sit-ins in Congressional offices, and a massive number of phone calls with 499 to 1 opposing the war. Obama could not get the votes to support the war. Harry Reid surrendered to the public by never holding a vote.

The other superpower, the people, had stopped a war. Obama became the first president to announce a bombing campaign who was forced to back down by the people. But the victory would be temporary, neocons and militarists continued to push for war. Based on new fake terror fears, and false chemical attack allegations, the 'humanitarian' destruction of Syria proceeded.

WSWS described how the war escalated under Obama, writing, "The illegal US occupation of Syria, begun under the Obama administration in October 2015 without authorization from either the United Nations or the Syrian government." There was a shift from CIA support for Al Qaeda-linked militias to war to bring down the Assad government. US troops coordinated a campaign of airstrikes that reduced the city of Raqqa and other Syrian communities to rubble. Amnesty International, after conducting field investigations, reported the US has committed war crimes in Syria. Vijay Prashad described the US creating "hell on Earth" in Syria.

Despite this, the US was losing the war in Syria. With Russia coming to the aid of its ally, Assad was not going to be removed.

Trump escalated and drove the US deeper into the Middle East quagmire betraying the non-interventionist base who elected him. The corporate media praised Trump was as 'becoming president' for bombing Syria based on another unproven chemical attack. Later, even General Mattis admitted there was no evidence tying Assad to chemical attacks.

Early this year, the Trump administration was talking about having a permanent presence in one-third of Syria with 30,000 Syrian Kurds as the ground forces, US air support and eight new US bases. Protests continued against the bombing of Syria throughout the spring in the US and around the world.

Now, as Andre Vltchek describes, the Syrian people have prevailed and most of the country is liberated. People are returning and rebuilding.

Related Topic(s): Syria; Syrian Withdrawal, Add Tags
Add to My Group(s)
Go To Commenting
The views expressed herein are the sole responsibility of the author and do not necessarily reflect those of this website or its editors.