Watergate was a major political scandal that occurred in the United States in the 1970s, following a break-in at the Democratic National Committee (DNC) headquarters at the Watergate office complex in Washington, D.C. in 1972. President Richard Nixon's administration attempted a cover-up of its involvement. 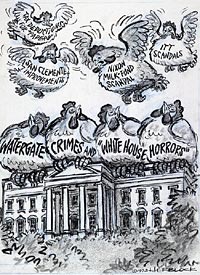 I am Not a Crook. - Herblock's History: Political Cartoons from ...
(Image by loc.gov)   Details   DMCA

This time around leaked documents were exposed to the public rather than used in secret to expose political operatives and their subversion of the election process. We find some of the guilty exposed but pointing the finger elsewhere as they try to shoot the messenger. Time will tell if the fall out leads to new and open elections or more betrayal. We can only hope that our better side of angels will survive the mudslinging for a restart.

In his article, "The year we reinvented the truth" by Shiv Visvanathan he elaborates in a look from above the fray to the stage below for some clarity.

"A post-truth society combines facts and illusions in substitutive ways. It is a drama enacted by a population that no longer trusts the old definition of the political. It is the reinvention of trust, which makes society rewrite political facts. Facts are no longer empirical entities, but a kaleidoscopic mix of anxieties, misunderstandings and myths. In this collage of partly-empirical data, gossip is often mistaken for gospel. Then, one has to go beyond the lexicologist to the storyteller to unravel meaning."

"Psephology is helpless before social constructions. The usual logic of politics -- facts, experience, professionalism -- crumbled before an emotional orchestra. Post-truth politics is a return to the primordial, the primitive, the irrational, and challenges the logic of institutionalism."

A restart will first require a look from above the fray and the question is, are we capable?

Related Topic(s): Election; Expose; Leadership- Leaders; Political Ad; Political Assassinations; Political Mudslinging; Political Mythology; Political Psychology; Politics; Scandal, Add Tags
Add to My Group(s)
Go To Commenting
The views expressed herein are the sole responsibility of the author and do not necessarily reflect those of this website or its editors.