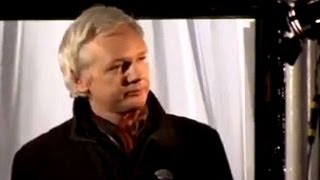 Consortium News broadcast the 11th Unity4J vigil for WikiLeaks publisher Julian Assange on Friday night. You can watch it here.

Ecuador tries to find a legal way out of its commitment to Assange's asylum in its London embassy, while Trump lawyer Rudy Giuliani says Assange should not be charged.

Consortiumnews.com was founded by Robert Parry in 1995 as the first investigative news magazine on the Internet. The site was meant to be -- and has become -- a home for important, well-reported stories and a challenge to the inept but dominant (more...)
Related Topic(s): Assange Vigil; Julian Assange; Wikileaks, Add Tags
Add to My Group(s)
Go To Commenting
The views expressed herein are the sole responsibility of the author and do not necessarily reflect those of this website or its editors.