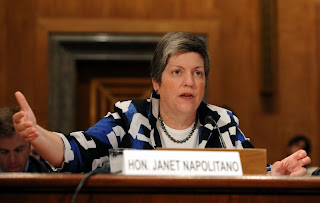 "By Dec. 31, no state will have issued a Real ID compliant identification document. We cannot have national standards for driver's licenses when the states themselves refuse to participate,"-- DHS Secretary Janet Napolitano

WASHINGTON- The first Anti-Real ID hearing in U.S. history clearly illuminated-the states need more time to absorb federal standards for identity. An optimistic vantage point included further consideration of the PASS Act, privacy considerations still far from the goals of a clinical repeal of the federal Real ID Act mentioned in late April.
All parties with a stake in Real ID have 15 days to prepare a statement to enter public record for consideration . -The next markup, or opportunity for PASS Act revisions, takes-place July 29th,-2009.
It was refreshing to hear Sen. Joe Lieberman say, "We are not surprised to see that we are here today." The Real ID Act passed without a debate, eluding due process. States were then asked to absorb the costs of inadequate technologies which would not protect them. -Consequently States resisted the costs and dangers of incorporating the legislation. -DHS is appropriately back to the drawing board.
Senator Collins' opening statements outed that the PASS Act does not repeal the Real ID Act but refines it. The 9-11 Commission recommendations continue to propell the PASS Act in lieu of the Real ID Act.
The DHS hearing committee only recognized 13 states who have legally opposed the federal legislation. Over 25 states found enough fault with the Real ID program to beat it back. The PASS Act unfortunately smacks of corporate shame, to the point of media labeling the legislation as a rebranding effort of Real ID. As the corporate precedent persists, the PASS Act is a way to legally override States laws into contending in a second round of stomaching expensive tech mandates. States could not afford the build of the central databases. They might be able to afford the RFID and biometrics as part and parcel behind the Western Hemisphere Travel Initiative, propelled by the 9-11 Commission report.
If the PASS Act prevails, States will be deadlined again to comply with federal mandates.-
Lieberman relished "rubbing it in"; as the Real ID Act's passage and subsequent failure also repealed his 9-11 Commissions identity work in the Intelligence Reform and Terrorism Prevention Act of 2004. Lieberman observes, like many in Washington, to corporeal ignorance and detriment, the 9-11 Commission report's ability to grant legislators super powers. The report's role in 2009 has been reduced to a Reichstag fire poker for disaster capitalist beggars, filled with mysterious humanity driven omissions. The U.S. government expects Americans to swallow whole any agenda kicked down over the 9-11 Commission report, based in fact or fiction. -One such agenda is the acceptance of a national identity based on 9-11 hijackers -lawfully present in the U.S. on temporary Visas.-

Sheila Dean is the blog editor for BeatTheChip.org and speaks for the 5-11 Campaign, an anti-national ID advocacy campaign. Sheila promotes American Bill of Rights retention and deliverance from the federal banking system. She also produces (more...)
Related Topic(s): Biometrics; Burris; Identity; Janet Napolitano; Legislation; License; Media Washington Post; Police; Privacy; Privacy; (more...) RFID; RealID; Security; Sex; Surveillance; Undocumented, Add Tags  (less...)
Add to My Group(s)
Go To Commenting
The views expressed herein are the sole responsibility of the author and do not necessarily reflect those of this website or its editors.