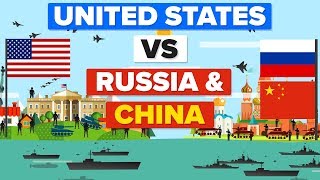 USA vs Russia and China - Who Would Win?
(Image by YouTube, Channel: The Infographics Show)   Details   DMCA

The hubris and arrogance of Washington have been at work since the Clinton regime to destroy the power and relevance of the United States.

This website has an international audience. The most asked question from this audience is the world order. There is a realization that Washington's control might weaken, a development people abroad see as hopeful. They ask me for verification of their hope.

Here is my answer:

Russia has a far more capable military with weapon systems unmatched by the US. The US is drowning in debt, and the illegal and irresponsible sanctions that Washington tries to impose on others are driving the world's largest countries away from the use of the US dollar as world reserve currency and away from Western clearance systems such as SWIFT. The United States already has one foot in the grave. Any country sufficiently stupid to ally with the US is allied with a dead man walking.

President Eisenhower, a five-star general, warned Americans 57 years ago to no effect that the military/security complex was already a threat to the American people's ability to control their government. Today the military/security complex is the Government. As Udo Ulfkotte documented in his book, Journalists for Hire: How the CIA buys the News -- no you can't buy a copy unless you can find a used copy in German in a German book store, the CIA has seen to that -- journalism independent of official explanations no longer exists in the Western world.

Much of the world does not understand this. Aside from the material interests of Russian and Chinese capitalists, a portion of the youth of both superpowers, and also even in Iran, have succumbed to brainwashing by American propaganda. Gullible beyond belief, they are more loyal to America than they are to their own countries.

The United States itself is extremely unsuccessful, but its propaganda still rules the world. The consequence is that, based on its propagandist success, Washington thinks it still holds the balance of economic and military power. This is a delusion that is leading Washington to nuclear war.

Considering the hyper-sonic speed, trajectory changeability and massive power of Russian nuclear weapons, war with Russia will result in nothing whatsoever being left of the US and its vassals, who sold out European peoples for Washington's money.

Related Topic(s): Military; Power; Propaganda; Weapons; World Issues, Add Tags
Add to My Group(s)
Go To Commenting
The views expressed herein are the sole responsibility of the author and do not necessarily reflect those of this website or its editors.