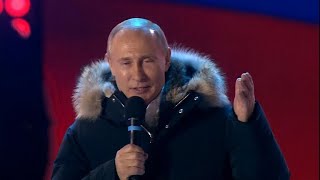 I agree with Stephen Lendman (below) that the Russian government's efforts to deal with the West on the basis of evidence and law are futile. There is only one Western foreign policy and it is Washington's. Washington's "diplomacy" consists only of lies and force. It was a reasonable decision for Russia to attempt diplomatic engagement with the West on the basis of facts, evidence, and law, but it has been to no avail. For Russia to continue on this failed course is risky, not only to Russia but to the entire world.

Indeed, nothing is more dangerous to the world than Russia's self-delusion about "Western partners." Russia only has Western enemies. These enemies intend to remove the constraint that Russia (and China) place on Washington's unilateralism. The various incidents staged by the West, such as the Skirpal poisoning, Syrian use of chemical weapons, Malaysian airliner, and false charges, such as Russian invasion of Ukraine, are part of the West's determined intent to isolate Russia, deny her any influence, and prepare the insouciant Western populations for conflict with Russia.

To avoid war Russia should turn her back, but not her eyes, on the West, stop responding to false charges, evict all Western embassies and every other kind of presence including Western investment, and focus on relations with China and the East. Russia's attempt to pursue mutual interests with the West only results in more orchestrated incidents. The Russian government's failure to complete the liberation of Syria has given Washington Syrian territory from which to renew the conflict. The failure to accept Luhansk and Donetsk into Russia has provided Washington with the opportunity to arm and train the Ukrainian army and renew the assault on the Russian populations of Ukraine. Washington has gained many proxies for its wars against Russia and intends to use them to wear down Russia. Israel has demanded that Washington renew the attacks on Iran, and Trump is complying. Russia faces simultaneous attacks on Syria, Iran, and the Donetsk and Luhansk Republics, along with troubles in former Central Asian republics of the Soviet Union and intensified accusations from Washington and NATO.

The crazed neoconservatives, such as Trump's National Security Adviser John Bolton, think that Russia will buckle under the strains, sue for peace, and accept US hegemony. If this assumption is incorrect, the outcome of Washington's hostile actions against Russia is likely to be nuclear war. The side that Stephen Lendman and I are talking is neither the side of Washington nor Russia, but the side of humanity and all life against nuclear war.

How the Russian government could ignore the clearly stated US hegemony in the 1992 Wolfowitz Doctrine is a mystery. The Wolfowitz doctrine states that the US's primary goal is "to prevent the re-emergence of a new rival, either on the territory of the former Soviet Union or elsewhere, that poses a threat on the order of that posed formerly by the Soviet Union." The doctrine stresses that "this is a dominant consideration underlying the new regional defense strategy and requires that we endeavor to prevent any hostile power from dominating a region whose resources would, under consolidated control, be sufficient to general global power." In the Middle East and Southwest Asia, Washington's "overall objective is to remain the predominant outside power in the region and preserve US and Western access to the region's oil." The doctrine also states that the US will act to restrain India's alleged "hegemonic aspirations" in South Asia, and warns of potential conflicts requiring military intervention with Cuba and China.

By "threat" Wolfowitz does not mean a military threat. By "threat" he means a multi-polar world that constrains Washington's unilateralism. The doctrine states that the US will permit no alternative to US unilateralism. The doctrine is a statement that Washington intends hegemony over the entire world. There has been no repudiation of this doctrine. Indeed, we see its implementation in the long list of false accusations and demonizations of Russia and her leader and in the false charges against Syria, Iraq, Afghanistan, Libya, Somalia, Yemen, Venezuela, China, Iran, and North Korea.

If Russia wants to be part of the West, Russia should realize that the price is the same loss of sovereignty that characterizes Washington's European vassal states.

The combination represents a major setback for world peace and stability. Greater aggression is likely, along with the triumph of neoliberal harshness over social justice, presenting a dismal and frightening state of affairs.

What to expect ahead? War in Syria is more likely to escalate than wind down, an unthinkable US/Russia confrontation ominously possible.

The Iran nuclear deal is either doomed, or likely to be gutted by Washington, accomplishing the same thing -- with only tepid, ineffective opposition from P5+1 countries Britain, France and Germany.

The EU most often bends to Washington's will when enough pressure is applied.

Related Topic(s): Conflict; Hegemony; Neocons; Skripal; Washington Greed, Add Tags
Add to My Group(s)
Go To Commenting
The views expressed herein are the sole responsibility of the author and do not necessarily reflect those of this website or its editors.