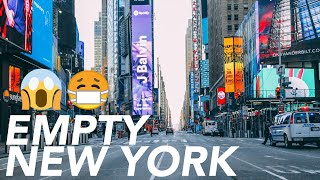 Empty New York in Lockdown New York is empty during this lockdown, the emptiest it has been in over 80 years. Let's take a drive down Broadway from 122nd Street to Battery Park. This was ...
(Image by YouTube, Channel: Urbanist: History of Cities)   Details   DMCA

Times Square in New York City during the Covid-19 lockdown

As we enter the almost two month lockdown over Covid-19 in the US some questions do arise.

The first of which is rather complex:

People who "normally" don't trust the government or its complicit enabling corporate MSM, or at least highly skeptical of their pronouncements seem-at least to this observer-to believe whatever that government says regarding the dictates it has foisted on the people, namely the unprecedented lockdown, shelter in place, social distancing, wearing of masks, the shutdown of non-essential businesses, the closing of schools all measures presented as preventing the virus from spreading and killing even more people.

It's as if all the pronouncements by the "government" whether its Trump, the state governors, city mayors, all of a sudden became synonymous with them telling the truth-or at least perceived as such by their fellow travelers. Dems automatically discount whatever Trump says but to his adherents it's the gospel.

But almost everyone across the political spectrum, initially at least, believed their states governors pronouncements as well as big city and smaller town mayors. Why no pushback?

Yet throughout history there has never been a lockdown over a virus epidemic. And this is the first time healthy people have been quarantined. Why?

The sick have always been quarantined as a justifiable measure to prevent a disease from spreading. That makes perfect sense. The reason given to quarantine the healthy was there weren't enough testing kits available, scientific double blind and random testing for the virus would take months so better safe than sorry the government ordained quarantining everybody. Was this justified?

Of course it didn't help when we were told the virus could kill millions which by itself induced existential fear among people. This was an assumption made by WHO Director General Tedros at the G-20 Leaders Summit March 26, 2020 with him saying, "Millions of people could die if governments don't take aggressive action against the coronavirus." And boy did they ever take aggressive action. It was as if Tedros was referencing the 1918 Flu pandemic that killed an estimated 50 million people worldwide. Why did Tedros make such a declaration which created panic and hysteria among people worldwide.

Now that estimate (guesstimate?) of millions dying worldwide from Covid-19 has been drastically revised downward and projected to be some 250,000 worldwide and up to 100,000 in the US. To be sure that's a huge number of deaths but certainly nowhere near the "millions" dying Tedros projected 1 1/2 months ago. Where is the admission by the government "authorities" the initial death estimates were greatly inflated and the severe measures they took were unwarranted?

What's so infuriating with numbers of the coronavirus equivocating a bad flu season why is most of the country still in lockdown? Why are non-essential businesses still closed? Why are healthy people unable to return to work? Why are the schools still closed?

Retired. The author of "DECEIT AND EXCESS IN AMERICA, HOW THE MONEYED INTERESTS HAVE STOLEN AMERICA AND HOW WE CAN GET IT BACK", Authorhouse, 2009
Related Topic(s): Coronavirus; Lockdown; Questions; Shutdown, Add Tags
Add to My Group(s)
Go To Commenting
The views expressed herein are the sole responsibility of the author and do not necessarily reflect those of this website or its editors.