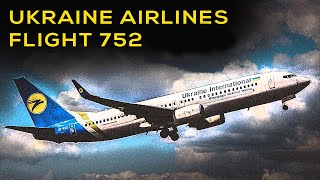 UKRAINE AIRLINES FLIGHT 752 UPDATE ukraineairlines #cabincrew #aviation Whats happened to boeing 737-800, was it a human error or was it technical. This is my viewpoint as a cabincrew.
(Image by YouTube, Channel: noMADic MANAV)   Details   DMCA

"There is much still to explain about the downing of Ukrainian Airlines Flight 752", this according to Philip Girardi, in his latest article, "Who Targeted Ukraine Airliner Flight 752?, Iran Shot It Down But There May Be More To The Story." [1]

Girardi hypothesizes... "there just may be considerably more to the story involving cyberwarfare carried out by the U.S. and possibly Israeli governments".

"What seems to have been a case of bad judgments and human error does, however, include some elements that have yet to be explained. The Iranian missile operator reportedly experienced considerable 'jamming' and the planes transponder switched off and stopped transmitting several minutes before the missiles were launched. There were also problems with the communications network of the air defense command, which may have been related.

The electronic jamming coming from an unknown source meant that the air defense system was placed on manual operation, relying on human intervention to launch. The human role meant that an operator had to make a quick judgment in a pressure situation in which he had only moments to react. The shutdown of the transponder, which automatically signaled to the operator and Tor electronics that the plane was civilian, instead automatically indicated that it was hostile. The operator, have been briefed on the possibility of incoming American cruise missiles, then fired.

The two missiles that brought the plane down came from a Russian-made system called Tor by the Russians. The system includes both radar to detect and track targets as well as an independent launch system, which includes an Identification Friend or Foe (IFF) system functionally capable of reading call signs and transponder signals to prevent accidents. Given what happened on that morning in Tehran, it is plausible to assume that something or someone deliberately interfered with both the Iranian air defenses and with the transponder on the airplane, possibly as part of an attempt to create an aviation accident that would attributed to the Iranian government.

The SA-15 Tor defense system used by Iran has one major vulnerability. It can be hacked or 'spoofed', permitting an intruder to impersonate a legitimate user and take control. The United States Navy and Air Force reportedly have developed technologies that 'can fool enemy radar systems with false and deceptively moving targets'. Fooling the system also mean fooling the operator. The Guardian has also reported independently how the United States military has long been developing systems that can from a distance alter the electronics and targeting of Iran's available missiles.

The same technology can, of course, be used to alter or even mask the transponder on a civilian airliner in such a fashion as to send false information about identity and location. The United States has the cyber and electronic warfare capability to both jam and alter signals relating to both airliner transponders and to the Iranian air defenses. Israel presumably has the same ability.

It all suggests a premeditated and carefully planned event."

Iran "is being depicted in much of the international media as little more than an unprincipled actor with blood on its hands. There is much still to explain about the downing of Ukrainian Airlines Flight 752.".

Considering the sordid history of the US initiating false flag attacks (Gulf of Tonkin anyone) which truth came to light many years later, the Ukraine airliner downing by Iranian missiles needs further explaining. Giraldi's piece certainly "suggests a premeditated and carefully planned event," something the US is notoriously capable of committing.

So yes "there is much still to explain".

[1] "Who targeted Ukraine Airliner Flight 752?, Iran Shot It Down But There May Be More To The Story", by Philip Girardi, Information Clearing House, January 20, 2020.

Retired. The author of "DECEIT AND EXCESS IN AMERICA, HOW THE MONEYED INTERESTS HAVE STOLEN AMERICA AND HOW WE CAN GET IT BACK", Authorhouse, 2009
Related Topic(s): Cyberwarfare; Flight 752; Ukraine, Add Tags
Add to My Group(s)
Go To Commenting
The views expressed herein are the sole responsibility of the author and do not necessarily reflect those of this website or its editors.