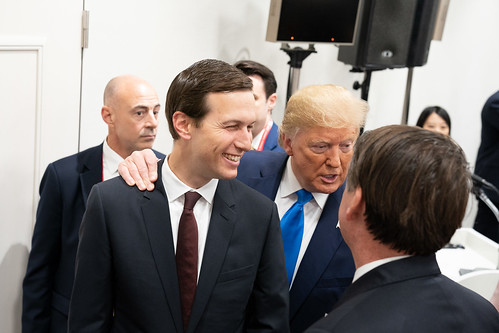 President Donald Trump speaks with Senior Advisor to the President Jared Kushner following the G20 Women's Empowerment Event
(Image by The White House)   Details   DMCA
I investigated Trump during the 2016 campaign, and concluded that he is an egocentric malignant narcissist who lies all the time, but you can be sure he knew that giving Erdogan permission to wage war on our Kurdish allies in northeastern Syria would alienate all of his allies in Congress and send a very loud abuse of power message to the world.

The real danger for Trump is not that his betrayal of the Kurds may persuade a critical mass of GOP senators to vote for his removal from office, instead Trump has forced his devout Republicans to accept his abuse of presidential power in ways that shock the American people, no matter their partisan allegiance. [1]

Forget any explanation that his erratic foreign policy is helping Russia or Israel. Trump's decision will impact Russia's position in the Middle East but that may turn into more of a "headache than a boon for Russia," and Netanyahu's position is that "Israel strongly condemns the Turkish invasion of the Kurdish areas in Syria."

He also warned against the ethnic cleansing of the Kurds by Turkey and its proxies, stating that "Israel is prepared to extend humanitarian assistance to the gallant Kurdish people."

Frida Ghitis, a former CNN producer and correspondent, and current world affairs columnist at the Bezos anti-trump newspaper, writes that Trump's Syria decision is so incoherent, contradictory and harmful, that it is imperative we find out what was really lies behind his decision. We need the real story of why Trump sold out the Kurds[2]

Two Dailys and a Cockburn

I saw this story pop up around midnight that, if verified by other sources - including one of the new whistleblowers they're reporting a source told them had nothing to do with the Ukraine saga - would explain Trump's sudden withdrawal of U.S. forces in Syria and puts a target squarely on Jared Kushner's back for providing the opening to Washington Post reporter Jamal Khashoggi's murder at the Saudi embassy in Istanbul in October of last year.

It would also expose a U.S. president as having been blackmailed by another head of state into abandoning our Syrian Kurdish allies to protect his son-in-law.

The UK's Daily Mail released this story at midnight based on an article that was published late last night in the Spectator by the owners of the UK's The Daily Telegraph. The Spectator has a paywall, but you may be able to read the full article once. I hope it isn't true. [3]

Cockburn's Blog at the Spectator, 'Seven whistleblowers' and a story that - if true - could be deadly for Jared Kushnerhad a plausible explanation for Trump's decision (10/6) to withdraw troops from northeastern Syria. Excerpts from the November 3, 2019 11:51 AM post below:

Cockburn's source says that at least one of the (purported) 'Seven whistleblowers'has nothing to do with Ukraine at all. Instead, it's claimed that this whistleblower reported a call between Trump and the Saudi ruler, Mohammed bin Salman. He or she is said to have had 'concerns' about what was said on the call about the president's son-in-law and adviser, Jared Kushner.

According to Cockburn's source about the seven whistleblowers, there's more: Kushner (allegedly) gave the green light to MBS to arrest the dissident journalist, Jamal Khashoggi, who was later murdered and dismembered in the Saudi consulate in Istanbul.

A second source tells Cockburn that this is true and adds a crucial twist to the story. This source claims that Turkish intelligence obtained an intercept of the call between Kushner and MBS. And President Erdogan used it to get Trump to roll over and pull American troops out of northern Syria before the Turks invaded. A White House official has told the Daily Mail that this story is 'false nonsense'. However, Cockburn hears that investigators for the House Intelligence Committee are looking into it. Who knows whether any of this is true"but Adam Schiff certainly seems to be smiling a lot these days. Got a tip for Cockburn?

Is it possible that the only plausible explanation for why Trump jeopardized years of hard-won progress in the fight against ISIS is that:

A post at a group blog forumfocused on liberal American politics, summarizing astory at a daily UK tabloid known for ridiculous headlines and spearheading vicious coverage of the British royals, referencing The Cockburn blog, referred to some readers as the "gossip column," at The Spectator Magazine?

Why did Kushner want Jamal Khashoggi arrested? But even more interesting is that no one at the Two Daily's or Cockburn is asking why Kushner greenlighted the arrest. The only article so far that has an explanation for why he wanted him arrested, was published a year ago at "The Medium"on Nov 17, 2018. In Death, Khashoggi Exposes the Corruption of Kushner and TrumpThere's a word for what may be going on here: espionage, by Greg Olear, Nov 17, 2018

The Khashoggi Murder: Putting aside the heinousness of the actual crime-to say nothing of MbS's betrayal of the members of his own security detail-the Khashoggi affair has dramatic significance to the United States in general and to Donald Trump and Jared Kushner in particular.

With respect to the assassination, Trump and Kushner both have skin in the game. Khashoggi was not banned from Saudi media for his criticisms of MbS, but rather for his criticisms of Donald Trump. More importantly, U.S. intelligence knew of a plan to lure Khashoggi back to arrest him, so the president and the de facto ambassador to Saudi Arabia must have also known. If they knew and did not share the information with Khashoggi, they are liable. Per the Washington Post:

Why exactly are Trump and Kushner going to the mat for MbS? Is it to advance U.S. interests-or their own? Kushner's company received a $57 million loan from Fortress Investment Group, which was recently purchased by SoftFund, a Saudi investment concern, to bail out its troubled property at One Journal Square in Jersey City. (A larger and more widely-reported loan, to bail out the troubled property at 666 Fifth Avenue, came the following summer, via Qatar.)

Related Topic(s): Jared Kushner; Jared Kushner; Kurds; Syrian Kurds; Trump; Trump Against Democracy; Trump And Saudi Arabia; Trump Presidency, Add Tags
Add to My Group(s)
Go To Commenting
The views expressed herein are the sole responsibility of the author and do not necessarily reflect those of this website or its editors.