"Trump's public charge rule is a xenophobic and classic attack on immigrants." 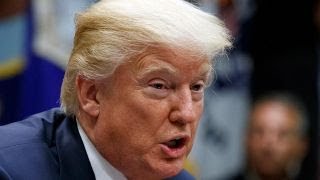 The Trump administration on Monday finalized a rule that could deny permanent residency -- or "green cards" -- to immigrants who have received public benefits such as food stamps and housing assistance, a move rights groups condemned as an attack on low-income families that could have "a dire humanitarian impact."

According to CBS News, the long-anticipated policy "would require caseworkers to consider the use of government housing, food, and medical assistance such as the widely-used Section 8 housing vouchers, the Supplemental Nutrition Assistance Program (SNAP), and Medicare's Part D prescription drug coverage" when examining permanent residency applications.

The 837-page rule (pdf), CBS reported, "would subject immigrant households who fall below certain income thresholds to the 'public charge' test -- which would also consider how well applicants speak, read, and write English. Under the proposed rule, any diagnosed medical condition that requires extensive medical treatment would also 'weigh heavily' in evaluations by caseworkers."

Immigrant rights groups that denounced the plan when it was first unveiled in September raised alarm on Monday and vowed to take legal action against the Trump administration to stop the rule, which is now set to take effect in 62 days.

Marielena Hincapie', executive director of the National Immigration Law Center, called the regulation "a cruel new step toward weaponizing programs that are intended to help people by making them, instead, a means of separating families and sending immigrants and communities of color one message: you are not welcome here."

"This latest racially-motivated policy is a painful reminder that behind [President] Donald Trump's bluster, bureaucrats like [top adviser] Stephen Miller will stop at nothing to attack immigrants and destroy our legal immigration system," Hincapie' said in a statement. "It will have a dire humanitarian impact, forcing some families to forego critical life-saving healthcare and nutrition. The damage will be felt for decades to come."

commondreams.org is a progressive publisher
Related Topic(s): Humanitarian Crisis; Immigrants; Punishment; Trump Ego; Trump Hates Immigrants; Trump Signs Order, Add Tags
Add to My Group(s)
Go To Commenting
The views expressed herein are the sole responsibility of the author and do not necessarily reflect those of this website or its editors.