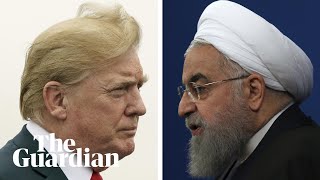 Donald Trump tweets warning for Iran's leader The US president, Donald Trump, has tweeted an angry warning to his Iranian counterpart, Hassan Rouhani. In his tweet, Trump told Rouhani to 'never, ever' ...
(Image by YouTube, Channel: Guardian News)   Details   DMCA

The war of words has just been escalated a notch between Trump and Iran with the "Donald" tweeting in all caps to Iranian President Rouhani, "NEVER, EVER THREATEN THE UNITED STATES OF AMERICA AGAIN OR YOU WILL SUFFER CONSEQUENCES THE LIKES OF WHICH FEW THROUGHOUT HISTORY HAVE EVER SUFFERED BEFORE. WE ARE NO LONGER A COUNTRY THAT WILL STAND FOR YOUR DEMENTED WORDS OF VIOLENCE AND DEATH BE CAUTIOUS."

Earlier in July Rouhani had said, "If Iran cannot export oil through the Persian Gulf no-one will do this. Either everyone will export, or no one" intimating Iran could block the Strait of Hormuz preventing all oil from Saudi Arabia and gas shipments from Qatar.

Trump has threatened countries would be hit with sanctions if they purchased Iranian oil after November 4, the date when new US sanctions are imposed on Iran.

All this rhetoric has escalated since Trump pulled the US from the Iran nuclear deal in May. All the other countries who signed the deal including Britain, France and Germany as well as Russia and China wanted it left intact and vowed they would adhere to it and continue trade with Iran. All European businesses want trade with Iran to continue unimpeded.

So beyond the war of words between Trump and Rouhani it is Europe that holds the key as Russia and China will continue their usual trade with Iran and deflect any US sanctions against them.

If Europe were to defy the US, actually stand up to Trump, continue to adhere to the multinational Iranian nuclear deal, reasserting sovereignty to benefit their interests by continuing to trade and buy Iranian oil the US would be the outlier, the main threat to economic stability in the world.

Will Europe stand up to Trump? Sorry to say that's doubtful. Trump threw scorn at the Europeans at NATO conference in Brussels less than two weeks ago saying they don't pay their fair share in their own defense. He particularly singled out German Chancellor Angela Merkel as "a captive to Russia" for her country's agreement to build the Nord Stream 2 gas pipeline under the Baltic Sea from Russia into Germany. Merkel responded she grew up in East Germany under the domination of the Soviet Union that "I am very happy that today we are united in freedom, the Federal Republic of Germany. Because of that we can say we can make our independent policies and make independent decisions."

Merkel's response to Trump sounds good. But that gas pipeline deal with Germany and Russia has nothing to do with the Iran nuclear deal. The Europeans continuing to adhere to the nuclear deal with Iran defying Trump's sanctions against them is where the rubber meets the road.

It's up to Europe. If they capitulate to US threats fearing sanctions against them there may be dire consequences ahead with a looming confrontation between the US and Iran all the more likely.

Retired. The author of "DECEIT AND EXCESS IN AMERICA, HOW THE MONEYED INTERESTS HAVE STOLEN AMERICA AND HOW WE CAN GET IT BACK", Authorhouse, 2009
Related Topic(s): Confrontation; Iran; Iran Nuclear Deal; Iran President Hassan Rouhani; Sanctions; Trade; Trump Threats, Add Tags
Add to My Group(s)
Go To Commenting
The views expressed herein are the sole responsibility of the author and do not necessarily reflect those of this website or its editors.