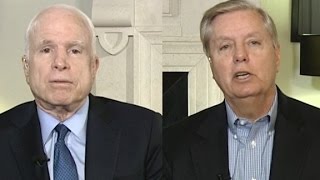 Senators John McCain (R. AZ.)and Lindsey Graham (R.S.C.) traveled to Ukraine during the recent Congressional holiday break and proclaimed to Ukrainian government marines, "2017 will be the year of offense." [1]

A must see video of McCain and Graham is attached to Patrick Christy's article, "US Senators Vow To CRUSH Russia". It is filled with vitriol against Russian President Vladimir Putin that boggles the mind.

Make no mistake these two war mongers are pushing for war against Russia though they qualify it with, "Our fight is not with the Russian people but with Putin".

How nice. Considering over 80% of the Russian people support Putin any war against Putin is a war with Russia.

In contrast President elect Trump has vowed to work with Putin so a clash between him and these two supposed senate Republican "leaders" over US policy toward Putin and Russia seems inevitable.

The disconnect from reality by these two Senate stooges staggers the imagination what with their over the top "Enough of Russian aggression" and " because we cannot allow Vladimir Putin to succeed here (Ukraine) because if he succeeds here, he will succeed in other countries".

Of course McCain and Graham make no reference to the February 2014 coup in Kiev brought about by behind the scenes machinations of Assistant Secretary of State Victoria Nuland that resulted in the overthrow of legitimately elected Ukraine President Viktor Yanukovych and the coming to power of a US backed neo-Nazi post coup regime to Kiev particularly against the Russian speaking Ukrainian's in Crimea and eastern Ukraine.

In Crimea the people having witnessed the coup in Kiev chose to hold a referendum and voted to secede from Ukraine and join the Russian Federation.

All the fiction of a supposed Russian invasion of Crimea we heard from Washington and their European NATO vassals was merely Russian soldiers already legitimately stationed in Crimea as part of a long term lease agreement with the Ukraine government that housed the Russian Black Sea Fleet. And all they did was help keep the peace in Crimea during the vote on the people's referendum.

So now with reality of Ukraine already twisted and misrepresented by the Obama administration, their NATO sycophants in Europe, the US corporate MSM and most of the Congress these past three years comes McCain and Graham upping the ante beating the drums for a war against Putin and Russia.

Trumps inauguration is in two weeks. Attempts of hemming him in or heading him off (with regards to his avowed stance of wanting to work with Putin) by two obsessed Putin haters McCain and Graham seems in high gear.

How this turns out is anyone's guess.

Retired. The author of "DECEIT AND EXCESS IN AMERICA, HOW THE MONEYED INTERESTS HAVE STOLEN AMERICA AND HOW WE CAN GET IT BACK", Authorhouse, 2009
Related Topic(s): Coup; Putin; Reality; Ukraine, Add Tags
Add to My Group(s)
Go To Commenting
The views expressed herein are the sole responsibility of the author and do not necessarily reflect those of this website or its editors.