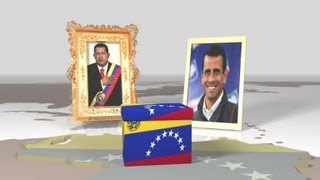 Venezuelans head to the polls to vote in their presidential election
(Image by YouTube, Channel: AFP news agency)   Details   DMCA

Since we published "Regime Change Fails: Is a Military Coup or Invasion Next," we received more information showing steps toward preparing for a potential military attack on Venezuela. Stopping this war needs to become a top priority for the peace movement.

Black Alliance for Peace (BAP) published a newsletter that reported "troubling news of an impending military assault on the sovereign nation of Venezuela by states and forces allied with the United States." Ajamu Baraka, the director, said the US is concerned that President Maduro will win the April 22 election, which would mean six more years in office. BAP urges people to include "No War On Venezuela" in actions being planned from February 16-23 for the 115th anniversary of the United States occupying Guantanamo.

Is the Path to War Through Border Disputes?

One way to start a war would be a cross-border dispute between Venezuela and Colombia, Brazil or Guyana. On February 12, the Maritime Herald reported that Admiral Kurt Tidd, head of the US Southern Command, arrived in Colombia just two days after the US Secretary of State Rex Tillerson met with President Juan Manuel Santos as part of Tillerson's unprecedented regime change tour. Tidd met with Colombian Defense Minister Luis Carlos Villegas and other senior officials to coordinate efforts around "regional stability" with a focus on Venezuela.

The Maritime Herald also reports US troops coming to Colombian military bases, paramilitaries coming to Colombian towns along the Venezuelan border, plans for "a joint naval force between the United States, Colombia and Mexico," and arrival of a contingent of 415 members of the United States Air Force to Panama to create support and logistics points for the operation against Venezuela. Also important are two fast-acting US military bases installed in the communities of Vichada and Leticia, Colombia, bordering Venezuela.

Both Colombia and Brazil have deployed more troops to their borders with Venezuela. Colombian President Santos ordered "the deployment of 3,000 additional security personnel to the Venezuelan border. This figure included 2,120 more soldiers." The decision came the day before officials from the US Southern Command met in Colombia to "discuss security cooperation." Brazil also announced plans to "double its border patrols on the Venezuelan frontier." The excuse for these increased deployments was due to Venezuelan migrants crossing the border into Colombia and Brazil.

To calm these concerns, President Maduro called for a meeting between Venezuelan authorities and Colombia over security concerns along their border. The Colombian government estimates that 450,000 Venezuelan migrants have entered the country in the last 18 months. Maduro said that official numbers did not equate to a "massive exodus" and reminded Colombia that during the Colombian civil war with the FARC, 5.6 million Colombians crossed the border to make Venezuela their home.

The corporate intelligence firm, Stratfor, which works closely with the US government, recently published a report that could be laying the groundwork for a border dispute. Stratfor wrote that Brazilian intelligence officials are going to meet with Guyana's officials to warn them that Venezuela is planning to attack Guyana. There is a long-term dispute over land between Venezuela and Guyana that is being litigated before the International Court of Justice. The report includes a questionable claim that there is an "ongoing dialogue with the Trump administration over the terms of President Nicolas Maduro and his party's departure from power." The reality is that President Maduro is preparing for the April election.

In response to these actions, President Maduro announced the Venezuelan armed forces will carry out military exercises on February 24 and 25 in "defense" of the nation to fine tune the movement of "tanks, missiles and helicopters as part of the nation's defense strategy."

The opposition in Venezuela has been seeking presidential elections since 2016 when they presented a petition for the recall of President Maduro. They claimed to collect enough signatures, but there were allegations of voter fraud, including thousands of dead people's names listed on the petitions.

Violent protests followed rejection of the petition and Henrique Capriles set a deadline for an election in November 2016, threatening larger protests. On November 1, opposition leader Henry Ramos, the head of the national assembly, announced cancellation of the protests. The opposition still pressed for an election. The government announced a special election to be held in February or March of 2018.

Kevin Zeese is co-chair of Come Home America, www.ComeHomeAmerica.US which seeks to end U.S. militarism and empire. He is also co-director of Its Our Economy, www.ItsOurEconomy.US which seeks to democratize the economy and give people greater (more...)
Related Topic(s): Allies; Elections; Venezuela; Venezuela Oppositions Terrorism; Violence-War, Add Tags
Add to My Group(s)
Go To Commenting
The views expressed herein are the sole responsibility of the author and do not necessarily reflect those of this website or its editors.