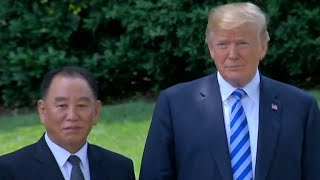 Kim Jong Un's right hand, General Kim Yong Chol, visited the U.S. for talks with Secretary of State Mike Pompeo. The General arrived in New York and made Pompeo travel up from Washington. The dinner and get-together on Wednesday were followed by extensive talks on Thursday in preparation for the Singapore summit ... certain once again, as anything can be with the mercurial Mr. Trump.

The dinner photos released show the parties with an affable Pompeo and a dour Kim in a room painted yellow. Should color matter? How important is it? Very, it turns out, according to the leading color theorist of the 20th century.

Faber Birren (1900-1988) spent his life studying color, and advocating its proper use for effect and well-being. He thought of it as akin to religion in its power to heal and change our feelings. According to him, humans are born with certain responses to color, just as they are with a fear of snakes.

Birren's fascination with color began early. After two years at the University of Chicago, he dropped out in 1921 to focus on his absorbing interest. Soon he began writing articles on color, and in 1928 published his first book "Color in Vision". He was to write seventeen of them and numerous articles. His experimentation and exploration yielded financial rewards when he began offering his services as a consultant.

At a Chicago wholesale meat business he noticed the white walls of the coolers gave the meat a gray look. Testing meat under different lighting, he determined a blue-green backdrop made the cuts appear more red. Sales shot up and his business career was launched.

He went on eventually to advise Walt Disney in the making of Bambi, Fantasia and Pinocchio. In industry, he developed a code for safety: yellow for falling hazards, red for fire protection and so on. His work is evident in many other spheres.

So what of the dour General Kim? Well Wedgwood Blue was the color of Birren's dining room, a peach pink stimulates appetite, salmon promotes a sense of well-being, light green reduces fatigue. And yellow is excellent for signalling danger ... perhaps not the best choice for the dinner. Is there an opportunity here to be seized for the summit?

Arshad M Khan is a former Professor. Educated at King's College London, Oklahoma State University and the University of Chicago, he has a multidisciplinary background that has frequently informed his research. He was elected a Fellow of the (more...)
Related Topic(s): Conflict; Peace; Peace; Weapons; Well-being, Add Tags
Add to My Group(s)
Go To Commenting
The views expressed herein are the sole responsibility of the author and do not necessarily reflect those of this website or its editors.