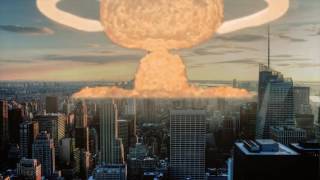 What happens when an unthinkable war meets an unbeatable case of war fever? Thanks to Russia-gate, unsubstantiated reports about the use of poison gas in Syria, and a slew of similar factoids and pseudo-scandals, the world may soon find out.

In saner times, including during the Cold War at even its most heated, political leaders knew not to push a conflict with a rival nuclear power too far. After all, what was the point of getting into a fight in which everyone would lose?

Cooler heads thus prevailed in Washington while more excitable sorts were shipped off to where they could do no harm. This is what kept the peace during the U-2 affair, the Berlin Wall, and the Cuban missile crisis and what promised to continue doing so even after the advent of American "unipolarity" in 1989-92.

But that was then. Today, the question is no longer how to avoid a fight that can only lead to catastrophe, but how to avoid a showdown with a country that "in the past four years has annexed Crimea, intervened in eastern Ukraine, sought to influence the American election in 2016, allegedly poisoned a former Russian spy living in Britain and propped up the murderous government of President Bashar al-Assad in Syria," to quote the bill of indictment in a recent front-page article in The New York Times.

Given that the list of alleged atrocities expands with virtually each passing week, the answer, increasingly, is: no way, no how. Since Russia is bent on spreading "conflict and discord" throughout the west -- if only in the eyes of the U.S., that is -- confrontation grows more and more likely.

This is despite the fact that the offenses cited by the Times are each more complex or dubious than the "newspaper of record" is willing to concede. The annexation of the Crimea, for instance, was a response to a US-financed, neo-Nazi-spearheaded coup in Kiev in February 2014 that caused the rickety Ukrainian state to collapse and sent Russophones in the east fleeing for protection into the arms of Moscow. After investing more than $5 billion to steer the Ukraine in such a disastrous direction according to then-Assistant Secretary of State Victoria Nuland, the US blamed Russia for the consequences. (See quote beginning at 7:42) As for charges of interference in the 2016 election, the Times itself noted back in January 2017 that the formal CIA-FBI-NSA "assessment" blaming the Kremlin was notably bereft of factual back-up. As the paper put it:

"[T]he declassified report contained no information about how the agencies had collected their data or had come to their conclusions. So it is bound to be attacked by skeptics and by partisans of Mr. Trump, who see the review as a political effort to impugn the legitimacy of his election."

Quite right. But now evidence-free assertions are accepted as fact while anyone who says otherwise is ignored or shouted down. Questions linger with regard to the March 4 poisoning of Sergei and Yulia Skripal, most notably why a supposedly ultra-powerful nerve agent would not take effect for more than seven hours. (Someone supposedly smeared the nerve agent on the front door of Sergei's home in Salisbury, England, which he and his daughter left around nine in the morning. Yet it was not until 4:15 p.m. that they were found incapacitated on a park bench after visiting a pub and eating at a local restaurant.)

As for "the murderous government of President Bashar al-Assad," such talk would be silly if the consequences weren't so dire. After all, it wasn't Assad who flooded Syria with tens of thousands of jihadis bent on massacring Christian, Druse, Alawites, and secularists. To the contrary, it was the U.S., Turkey, Saudi Arabia, and the other Arab Gulf states. As a now declassified Defense Intelligence Agency report noted back in August 2012:

-- "The Salafist[s], the Muslim Brotherhood, and AQI [i.e. Al Qaeda in Iraq] are the major forces driving the insurgency";

-- "The West, Gulf countries, and Turkey support the [rebel] opposition";

-- "If the situation unravels further, there is the possibility of establishing a declared or undeclared Salafist principality in eastern Syria";

-- "...[T]his is exactly what the supporting powers to the opposition [i.e., the US, Turkey, and the gulf states] want in order to isolate the Syrian regime, which is considered the strategic depth of the Shia expansion...."

Related Topic(s): Assad; Conflict; Neocons; Putin; Sanctions; Skripal; Syria; Violence-War, Add Tags
Add to My Group(s)
Go To Commenting
The views expressed herein are the sole responsibility of the author and do not necessarily reflect those of this website or its editors.