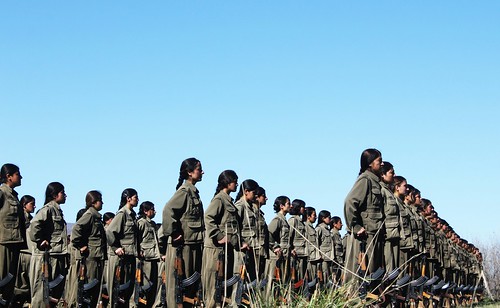 Despite appearances and differing ideologies, both the Kurds' SDF and ISIS are Western intelligence assets in Syria. Neither would exist in Syria without the West and its allies, and both serve to destroy the country.

The Empire's anti-democratic SDF proxies are not defeating the U.S Daesh proxies. They are simply replacing them.

One might reasonably ask how two seemingly opposed terrorist groups could possibly share the same strategic purpose. The answer would likely escape the awareness of the fighters as well, and it certainly escapes the awareness of most Canadians, whose tax dollars are supporting the terrorists. But the answer isn't that complicated.

Consider the similarities between the two groups:

ISIS/Daesh serves the military strategy of "place-setter"[2], as outlined in an earlier article. Empire first infests an area with terrorists, then destroys the area, using the fake pretext of "going after terrorists", subsequently, it channels the original terrorists elsewhere, and then replaces the former terrorists with new terrorist occupiers who are portrayed as "liberators".

Syrian journalist Nasser Atta describes the following video as an ISIS convoy "carrying 4500 fighters and their families leaving Raqqa a month ago after an agreement with US-backed Kurdish forces":

The West, their allies, and their proxies are not wanted in Syria. They are the problem, not the solution. Their foreign "interventions" in Syria amount to war crimes as policy.

[2] Mark Taliano, "The Islamic State as "Place-Setter" for the American Empire. ISIS is the Product of the US Military-Intelligence Complex." Global Research, 26 October, 2017. (https://www.globalresearch.ca/the-islamic-state-as-place-setter-for-u-s-empire-isis-is-the-product-of-the-us-military-intelligence-complex/5606371). Accessed 11 November, 2017

The original source of this article is Global Research

Related Topic(s): Assets; Daesh, Add Tags
Add to My Group(s)
Go To Commenting
The views expressed herein are the sole responsibility of the author and do not necessarily reflect those of this website or its editors.