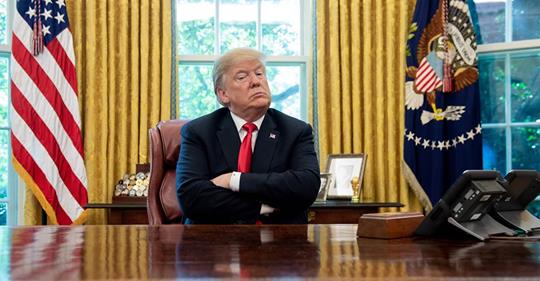 It is a difficult time to be an American. It is a difficult time to be a journalist in America. Trump meets with Russians in the oval office, no US press allowed"so what? Trump meets with Putin privately"twice. Trump takes the transcripts and swears the interpreter to secrecy"and? Half a dozen closely affiliated Trump campaign officials are indicted or are in prison for lying to Congress, lying to the FBI, witness tampering, money laundering and obstruction of justice. Trump's former campaign manager was acting as an unregistered agent of a foreign power"?

Pictures of the Virginia Governor in blackface surface from his college yearbook. The governor admits and apologies. Then denies being in the photo while admitting to appearing blackface at some other time. Wanna see me moon walk? For a journalist these should be glory days, but we live in a post truth environment. There is nothing true and there is nothing false. A revolving door of Trump appointees leave the White House each throwing their hands up in disgust. Each with their own's stories of Trump's incompetence his incoherence, his laziness and are treated with general response of ho hum.

The Trump Tower Moscow Project, the Trump foundation, the Trump Inaugural committee? It hearkens back to Al Capone's claim of just being an honest man. But back in the good ole days Americans thought, "He must think we're stupid?" Not anymore, Fox News would scream, why are they picking on an honest businessman, he's a job creator! CNN would ask, Is he just an honest businessman? Framing the argument with equally likely results. The music goes round and round and comes out here. In any other time, in any real sort of representative government Trump would be under insurmountable pressure to resign. Major national publications have called for Trump to be impeached. Major national politicians have called for Trump to be impeached and yet, nothing happens.

There is a Trump fatigue, rabbit punches of lies, lies and more lies. Buffered by a wall of false equivalencies, do you know what Obama did? Do you know what Hillary did? Well yeah, but that has nothing to do with anything unless you have a time machine. Do you know what Hadrian did? Do you know what kind of SOB Ramses the 2nd was? I recently saw a meme on Facebook; There are two kinds of Trump supporters, billionaires and idiots"which one are you? But due to Trump fatigue it's true, but who cares? The opposition offers memes of Nancy Pelosi with bug eyes"now there's an intellectual argument for you. Their defense is to point fingers with the worst defense imaginable, Trump's no worse than those other guys!

The Democrats their hand filled with high cards to play choose the null defense. Just letting Trump stumble and bumble along with hopes of helping Democratic prospects in 2020. With a madman in the nation's highest office the Democrats enter into negotiations. The madman breaks his word and won't sign bills he's already agreed to sign shutting down the government. And the Democratic response is to taunt the madman. Expecting a sane response from an insane person, kicking the can of madness down to road. Shh, the president is about to speak.

God Bless our Veterans and WW-2 heroes, God bless our sick children. We want to help Aids victims and build infrastructure. We want the birds to sing sweeter and the sun to shine brighter and it can all happen if"you call off the investigations. This is Al Capone promising to cut us all in on the profits if we would only stop investigating him. The difference, Al Capone was more likely to keep his word. The very idea of Trump giving a State of the Union address is a bizarreness, it is the Twilight Zone minus Rod Serling. It's a good life"as the ersatz Billy Mummy screams, You're a bad man, you're a very bad man! I'm gonna send this Congress to the cornfield, unless I get my way. This is not a President nor a chief executive, this is a monster.

Trump withdraws from the INF missile treaty and within hours Vladimir Putin announces a new missile program. But was it Trump's idea or Putin's? Who is the puppet and who is pulling the strings? That's what the lies are all about, Trumps connection with Russia, Trump's connection with Russia! All roads lead to Trump's connection with Russia. Jeff Sessions becomes Trump's target by"obeying the law. Trump gets rid of Sessions and names an "Acting" Attorney General. The acting Attorney General whose role is to be the eyes and ears of the administration over the Mueller investigation. Those who make deals with the investigations are "Rats" and those who don't make deals are noble.

Circumstantial evidence is evidence still. Trump claims Michael Cohen is just one of his lawyers. Cohen was a vice-president of Trump's company for over a decade. Up is down and down is up, the Justice department is crooked, and the FBI is out to get them. There is a deep state at work, an invisible deep state which only shows itself in anti-Trump investigations. That's it, what? You need proof? We don't know who they are but trust me, they're there! Trump doesn't know any of those people indicted or convicted, Manafort who? Stone what?

If this where a Rod Serling fantasy it would be too fantastic for television. The idea that tens of millions of Americans would watch a chronic liar for an hour and a half. Giving his laundry list of programs he has no intention of implementing. No plans, no definition or vision just lies, lies and more lies and in a kumbaya moment, promising it can all be true" if you'll stop the investigations. The bully offers lies in exchange for clemency. That is his only answer the only arrow in his quiver, a mob boss hiding his taxes and hiding his deals because he is corrupt. He's willing to make a deal, he wants to play ball. Come on play ball, I'll make it worth your while"wink, wink.

Trump should be removed from office" today. Whether he is a traitor is for a court to decide. Whether he is incompetent is beyond public questioning. This is no a normal Presidency this is an infestation. This isn't about Republicans or Democrats this is about criminality. Donald Trump is the antithesis of the American ideal, a racist, a fascist, a misogynist and a Nazi sympathizer.

Related Topic(s): Anti-trump; Congress; Incompetence; Infrastructure; Investigations; Lies; Monster; Obama; President; Republican, Add Tags
Add to My Group(s)
Go To Commenting
The views expressed herein are the sole responsibility of the author and do not necessarily reflect those of this website or its editors.