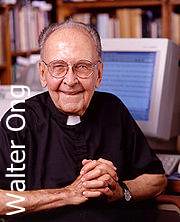 In the summer session in 1971, about fifty years ago now, with Father Ong's permission, I unofficially audited his interdisciplinary graduate course on Polemic in Literary and Academic Tradition: An Historical Survey. The class met from 7:30 a.m. to 8:50 a.m. daily on weekdays in an air-conditioned conference room in Pius XII Memorial Library at SLU.

I think that Ong first offered his polemic course in the spring semester of 1971. In any event, a graduate student who took it then told me about it. In any event, James Brown McGinnis III (1942-2009; Ph.D. in philosophy, Saint Louis University 1974), a graduate student in philosophy and the first director of the SLU Institute for the Study of Peace and Justice, arranged to have Ong teach the polemic course again in the summer of 1971 for certain students recruited through the Institute.

Now, by the summer of 1971, the French philosopher Michel Foucault (1926-1984) had made a strong international reputation for himself. Nevertheless, as far as I can recall, Ong did not mention Foucault in his summer of 1971 course.

However, in 1969, Foucault was elected to the prestigious College de France. He designated his chair as the history of systems of thought - presumably including Western philosophy as a system of thought. By 1969 when Foucault became chair of the history of systems of thought, Ong had long considered Western philosophy as a system of visualist thought - see, for example, Ong's massively researched 1958 book Ramus, Method, and the Decay of Dialogue: From the Art of Discourse to the Art of Reason (Harvard University Press). For further discussion of Ong's account of visualist thought in Western philosophy, see my lengthy OEN article "Walter J. Ong's Philosophical Thought" (dated September 20, 2020):

In any event, for Foucault, the period 1970-1984 was a remarkably productive period in his life. In this remarkably productive period in his life, he prepared what have now been published as four volumes in The History of Sex (1976, 1984a, 1984b, and, unfinished but substantially completed, 2018 in French; 1978, 1985, 1986, and 2021, respectively, in English). However, after Foucault had published volume 1 in 1976, in which he had announced his plan for subsequent volumes, he subsequently changed his plans drastically for volumes 2, 3, and 4, as I will explain momentarily below.

Now, the material that Ong worked up in his 1971 polemic course eventually became his 1979 Messenger Lectures at Cornell University and then his 1981 book Fighting for Life: Contest, Sexuality, and Consciousness (Cornell University Press) - in which he does not mention Foucault's volume 1 of The History of Sex (1976 in French; 1978 in English).

As mentioned, Michel Foucault (1926-1984) was elected to the prestigious College de France in 1969, which obliged him to deliver a public series of lectures each year. He himself designated his chair as the history of systems of thought. He was already internationally famous. In the period 1970-1984, he was enormously productive. In addition to his annual public lecture courses at the College de France, he delivered lecture series and faculty seminars in the United States and elsewhere. Edited versions of his lectures at the College de France and in the United States and elsewhere were published after his untimely death in 1984 at the age of 57. In addition, numerous edited interviews with Foucault were published, which also should be counted as among his publications.

For informative accounts of the various themes that emerged in Foucault's thought in his books and lectures in the remarkably productive period 1970-1984, see The Cambridge Foucault Lexicon, edited by Leonard Lawlor and John Nale (2014; paperback ed., 2020).

Related Topic(s): Sexuality, Add Tags
Add to My Group(s)
Go To Commenting
The views expressed herein are the sole responsibility of the author and do not necessarily reflect those of this website or its editors.