JPMorgan CEO Jamie Dimon decries socialism. Unless of course it's the banks that need a government bailout 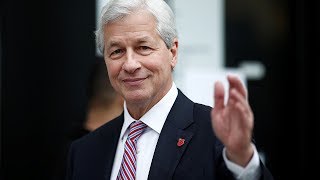 In his annual letter to shareholders, distributed last week, JPMorgan Chase CEO Jamie Dimon took aim at socialism, warning it would be "a disaster for our country, because it produces "stagnation, corruption and often worse."

Dimon should know. He was at the helm when JPMorgan received a $25bn socialist-like bailout in 2008, after it and other Wall Street banks almost tanked because of their reckless loans.

Dimon subsequently agreed to pay the government $13bn to settle charges that the bank overstated the quality of mortgages it was selling to investors in the run-up to the crisis. According to the Justice Department, JPMorgan acknowledged it had regularly and knowingly sold mortgages that should have never been sold. (Presumably this is where the "stagnation, corruption and often worse" comes in.)

If this isn't socialism, what is it?

More recently, Trump's bank regulators have heeded Dimon, and rolled back Dodd-Frank. Dimon was also instrumental in getting the big Trump tax cuts through Congress. They saved JPMorgan and the other big banks $21bn last year alone.

Ironically, a few weeks ago Dimon warned that income inequality is dividing America. He said that a "big chunk" of Americans have been left behind, and, announcing a $350m program to train workers for the jobs of the future, lamented that 40% of Americans make less than $15 an hour.

Related Topic(s): Bankers; Forbes; Inequality; JPMorgan Chase; Jamie Dimon; Socialism; Wall Street; Workers, Add Tags
Add to My Group(s)
Go To Commenting
The views expressed herein are the sole responsibility of the author and do not necessarily reflect those of this website or its editors.