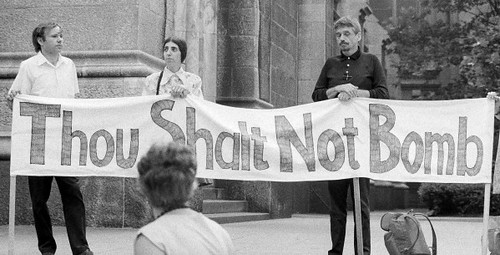 Today is a day to celebrate the prophetic voice and witness of Fr. Daniel Berrigan, the non-violent anti-war activist and poet, whose life and witness has touched so many lives. He was born on May 9, 1921 and would have been 100 years old today. He died five years ago, but his spirit continues to animate and inspire so many others. The following essay is from my recent book, Seeking Truth in a Country of Lies.

Radical dissidents and prophets have never had an easy time of it. When alive, that is. Once safely dead, however, honors and respect are often heaped on their heads. The dead can't talk back, or so it is assumed. Nor can they cause trouble.

Jesuit priest Fr. Daniel Berrigan was one such man. When he died on April 30, 2016, the major media, organs of propaganda and war promotion, noted his death in generally respectful ways. This included The New York Times. But back in 1988 when Daniel was a spry 68 years old, the Times published a review of his autobiography, To Dwell in Peace, which was a nauseating hatchet job aimed at dismissing his anti-war activism through the cheap trick of psychological reductionism and reversal.

How could Berrigan really be a Christian, a man of peace, the reviewer Kenneth Woodward (himself a product of eight years of Jesuit education) asked rhetorically, and be so angry? Wasn't he in truth a bitter, ungrateful, and angry - i.e. violent - "celebrity priest" masquerading as an apostle of peace? And therefore, were not his peace activities, his writings, and his uncompromising critique of American society null and void, the rantings of a disturbed man? Furthermore, by the unspoken intentional logic of such an ad hominem attack, were not those who follow in his footsteps, those who hear his words and - God forbid! - take them seriously, were not they too wolves in sheep's clothing, angry children trying to exact revenge on their parents? "Gratefulness, we learn, is not a Berrigan trait," Woodward concluded in his bilious review of a "pervasively angry autobiography." "The Berrigans (note the plural usage), it seems, never learned to laugh at themselves."

Such character assassination has long been one tool of the power elite. Silence or kill the prophets one way or another.

When Dan and I first met we walked together in the blue cold snowy silence of Ithaca nights. It was December 1967. He was a 46-year-old black-bereted whirling dervish orbiting a profound spiritual and poetic stillness; I, a 23-year-old Marine intent on declaring myself a conscientious objector before my reserve unit was activated and sent to Vietnam.

He had been arrested for the first time at a Pentagon demonstration in late October. A few days later his brother, Philip, together with three others, had upped the ante dramatically by pouring blood on draft files in Baltimore. This action, which became known as the Baltimore Four and started a chain of draft board raids over the next years, and the raging Vietnam War that Johnson was dramatically escalating, were the backdrop for my three-day visit with Dan. The invitation had been arranged by my inspirational college teacher, Bill Frain, Dan's friend.

Walking and talking, talking and walking, we whirled around the Cornell campus where Dan was a chaplain, into and out of town, from apartment to apartment, a gathering here, a Mass there. The intensity was electric. At a party I met and learned from the brilliant Pakistani scholar and activist Eqbal Ahmad. At an apartment Mass led by Dan in his inimitable style I felt as if we were early Jewish-Christians gathering in secret. There was a sense of foreboding, as if something would soon break asunder as the U.S. rained bombs and napalm down on the Vietnamese.

I recall a sense of intense agitation on Dan's part, as if events were conspiring to push him to answer an overwhelming question. I knew from the first that he was no J. Alfred Prufrock who would sit on the fence. He would never say, "I am no prophet - and here's no great matter/I have seen the moment of my greatness flicker/And I have seen the eternal Footman hold my coat, and snicker/And in short, I was afraid." A poet, yes, a lover of beauty, that I could tell; but I felt his fierceness from the start, and it was something I viscerally connected with. He was preparing for a great leap into the breach; was Odysseus readying to leave Ithaca, not for Troy to wage a violent war, but a peaceful Odysseus readying to leave Ithaca to travel to Vietnam to wage a non-violent war against war - a lifelong journey. I too felt that my life would never be the same and I was venturing out onto unchartered waters. His courage rubbed off on me.

In those few days with Dan I unlearned most of the lessons my Jesuit education had instilled in me. Deo et Patria were rent asunder. I had never accepted the Marine slogan that "my rifle is my life," nor had I fully ingested the Jesuits' conservative ideology - what Dan called "consensus, consensus" - that I should become a man successful through speaking out of both sides of my mouth and serving two masters. But at that point I had no Jesuit mentor who embodied another path. In Dan I found that man, or he found me.

Contrary to some public images of him, he was a man of indirection as well as bluntness. He had the gift of discernment. Not once during my initial stay with him did he suggest a course of action for me. We talked about the war, of course, of his brother Phil's and others' courage, but we also talked of poetry and art, of the beauty of starry winter nights and the dramatic waterfalls surrounding the Cornell campus. Most of all he wanted to know about me, my family, my background; he listened intently as if he were contemplating his own past as well, weighing the future. I had already decided to leave the Marines one way or the other, but we never discussed this. He arranged for me to speak to a Cornell lawyer who did anti-war work in case I needed legal help. But I felt I was in the presence of a man who knew and respected that such momentous decisions were made in solitary witness to one's conscience. I felt he supported me whatever I did.

When I set sail from Ithaca, I felt blessed and confirmed. I would never go to war; I knew that. But I also came away with a different lesson: that not participating in the killing wasn't enough. I would have to find ways to resist the forces of violence that were consuming the world. They would have to be my ways, not necessarily Dan's. I was unyielding in my conviction that I would not stay in the Marines no matter what the consequences; but after that I would have to choose and take responsibility for what Dan referred to as "the long haul" - a lifelong commitment to the values we shared. But values are probably too abstract a way to describe what I mean. Dan conveyed to me through his person that each of us must follow his soul's promptings - there was no formula. I was young enough to be his son, and yet he spoke to me as an equal. Despite his adamantine strength of purpose and conviction, he let me see the scarecrow man within. No words can describe the powerful stamp this set on my heart that has never left me.

Less than two months later the TET offensive exploded, and Dan was on that night flight to Hanoi with Howard Zinn to bring back three US airmen who had been shot down while bombing North Vietnam. Then the great anti-war leader, Martin Luther King, was executed by government forces in Memphis. The message sent was clear. Shortly Dan was invited by Philip to join the Catonsville action. He gave it prayer and thought, and then jumped in, knowing that the children he had met in the North Vietnamese bomb shelters hiding from American bombs were pleading with him. He later wrote of holding a little boy:

In my arms, fathered

Related Topic(s): Birthday; Criminally Complict; Daniel Berrigan; God; Inspirational; Peace Activism; Peace And Freedom; Responsibility; Spirit, Add Tags
Add to My Group(s)
Go To Commenting
The views expressed herein are the sole responsibility of the author and do not necessarily reflect those of this website or its editors.