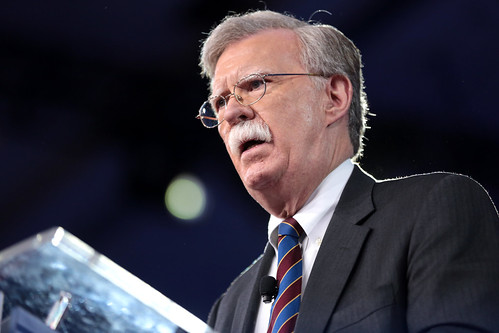 How preposterous! Peace Prize Laureate former Prez Jimmy Carter publicly warns Americans (and maybe the world), "I think John Bolton is a disaster for our country," "Maybe one of the worst mistakes that President Trump has made " is the appointment of John Bolton". . a "war-like figure, been advocating a war with North Korea for a long time and even promoting an attack on Iran, and who was one of the leading figures in orchestrating the decision to invade Iraq."

Well, let's see. Yes, what Carter said about John Bolton is absolutely true, however Carter's warning just reinforces the continual focus the CIA fed criminal mainstream media constantly puts on government officials to the detriment of public understanding that it is the insane investors in war whose investment interests these war provoking government officials represent. Powerful investors in high tech weapons of mass destruction and ever more sophisticated delivery systems forced the appointments of their willing hatchet-men Bolton, Brzezinski, and Kissinger in the first place.

Carter Appointed the Devil Himself

Given the horrific history of Carter's own Presidential Advisor and Carter's silence about it, his warning against the John Bolton appointment seems hypocritical to say the least. Jimmy Carter once elected president, to some important degree for the financial efforts of infamous war profiteer David Rockefeller, appointed Rockefeller's right hand associate, Zbigniew Brzezinski, as Presidential Advisor, who, in 1979, 'advised' Carter to order a CIA operation with allied secret services of both the US backed governments of Pakistan and Saudi Arabia to arm, fund and train a hillbilly warlord Islamic terrorist army in Afghanistan to overthrown the then very popular new women liberating socialist government in Kabul. These warlords had already been ordering executions of teachers sent out to teach girl students. How did peaceful Carter feel presenting Brzezinski with the Presidential Medal of Freedom two years later. (In 1998, Brzezinski would brag openly in a French magazine interview that it was his intention to scare the Soviet Union into sending in its military help to its neighbor nation, and become entrapped.) [Interview with Zbigniew Brzezinski, Le Nouvel Observateur (France), Jan 15-21, 1998, p. 76, translated from the original French by William Blum https://williamblum.org/essays/read/how-the-us-provoked-the-soviet-union-into-invading-afghanistan-and-starting ]

Brzezinski called call for a holy war of Islam against the Soviets and the Kabul government and invite Muslim fighters into Afghanistan from everywhere and especially from Saudi Arabia, an invite which would include the CIA funding Osama bin Ladin's participation. [Watch Brzezinski calling for Jihad.[https://www.youtube.com/watch?v=A9RCFZnWGE0]

After the Soviet military withdrawal and the terrorist defeat of the Kabul socialist government two years later, the most brutally savage second civil war between the American backed warlords brought even greater destruction and utter social disintegration until the restoration of peace by the arise of the Taliban ("Students" in Arabic), which founded the Islamic State of Afghanistan. In 2001, after the 9/11 attack suicide attack by Saudi Arabians in New York and Washington, came the US invasion of Afghanistan, the murderous overthrow of its government, and seventeen years of occupation war by a coalition that has included every single nation of Caucasian population in the world.

Now back to the point of the title of this tract. Was it Brzezinski's idea or his boss, David Rockefeller's idea to 'advise' President Carter to commit the crime of attacking the government of a friendly nation, and did Carter have the option of saying 'no, I will not commit the crime you are advising me to commit?' We can't ask Brzezinski, he died in 2017.

Though the cat is long out of the bag, Peace Prized Jimmy Carter, originator of thirty-nine years of death and destruction in Afghanistan,has kept an unforgivable silence. Does Jimmy really want to keep silent, when speaking out could help bring an end to the continual loss of lives. Or must Jimmy keep silent in the same way he felt he had to commit the crime, even though a President is thought to be in charge of his own conscience as well as the whole nation?

Ordering a secret attack on a friendly and smaller nation of people was surely not Carter's own personal wish, as probably neither were the other crimes he signed his name to. Can one imagine peace loving Jimmy Carter himself wanting to give the go ahead for the Kwangiu Massacre of the student led popular uprising against military rule of General Chun Doo Hwan Chun in Korea ? Chun was later was tried and condemned to death (Of course Carter wasn't condemned to death - Carter got the Nobel Peace Prize). Or do we think it was by his own free will that Carter facilitated the weaponry used in the brutal Indonesian government's exterminating war on the Timorese? Do we see Carter by his own free will answering the Vietnamese requesting the two billion in reparations promised them in the negative with the cruel words, "The destruction was mutual." Carter can be his own 'nice guy' self now that he is not in office only up to the point of not making waves for the ruling investors. Would an any ex-US president be free to confess regret for crimes the Deep State had made him commit in the name of all Americans while in office?

'A Financial Element in the Centers of Power has Owned the Government Since the Early 1830s,' FDR in 1932

Like the magician who keeps his audience's attention on one hand, while his other hand prepares the magical deception, USA's criminal media cartel keeps viewer, listener and reader attention focused on US presidents, their appointees, the whole corruption that is Congress and the courts of the Justice department, while nearly continuous genocidal illegal military action keeps going forward at the nod of USA'a real rulers, namely, that 'financial element in the centers of power, [which] has owned the government since the days of Andrew Jackson' to quote the last wealthy aristocrat insider American President, Franklin Roosevelt. ["The real truth of the matter is, as you and I know, that a financial element in the larger centers has owned the Government ever since the days of Andrew Jackson." Letter to Col. Edward House (21 November 1933); as quoted in F.D.R.: His Personal Letters, 1928-1945, edited by Elliott Roosevelt (New York: Duell, Sloan and Pearce, 1950), pg. 373]

Perhaps the best example of a president being ruled by his appointees representing what some are now calling the 'Deep State' (but up to now without reference to FDR's "financial element"), is President Eisenhower. This likable 'Ike,' out of character ordered the bloody overthrow of democratically elected popular governments of Iran, Guatemala and Congo; ordered the brutal bombing of little Laos; blocked an already agreed upon all-Vietnam election because everyone knew hero Ho Chi Minh would win; ordered a CIA prepared invasion of Cuba and threatened North Korea with nuclear destruction (the real Ike had earlier denounced the A-bombing of Japanese cities as unnecessary and unwarranted). But in the last hour of his eight years in office, the perhaps conscience bitten real Eisenhower warned the nation and world of the military industrial complex he himself had collaborated with in giving criminal orders, very often committing genocidal crimes.

Related Topic(s): Capitalism Over Humanity; Genocide; Investors; Us Congress Sells Out To Wall Street; Wall Street Driven Journalism; Wall Street Lobbyists, Add Tags
Add to My Group(s)
Go To Commenting
The views expressed herein are the sole responsibility of the author and do not necessarily reflect those of this website or its editors.