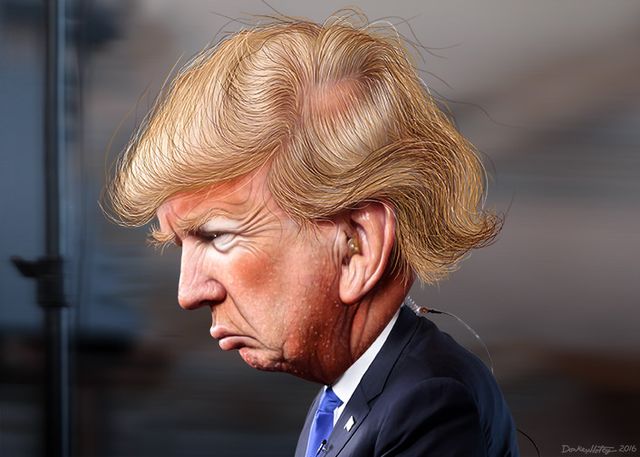 The past few weeks have seen some Democrats at certain levels within the Party urging a more conciliatory tone towards Trump and his extremist "policies," with an eye towards the midterm elections in November. From Chuck Schumer's strategic retreat on the budget (which I happen to agree with) to editorials by the likes of Frank Bruni of The New York Times, who partnered with longtime -- many would say "so-called" -- Democratic adviser Joe Trippi to pen this expression of heartfelt "concern," the Democratic establishment has begun to introduce cracks within the Resistance against this monstrous Thing that afflicts us from the Oval Office:

"In the highest circles of Democratic party politics, resistance is waning. 'This is normal enough,' many key Democrats seem to be saying. When Senate Minority Leader Chuck Schumer wrote in advance of Trump's State of the Union several weeks ago, he focused on finding ways to 'work with' the president, such as infrastructure.

"Bipartisan rhetoric is nothing new from politicians, but Democrats appear to be slipping towards making substantive policy concessions to Trump. Particularly in the Senate, Democrats have, bit by bit, begun acceding to Trumpian demands.

"As it stands, Democrats in both houses appear to be on the brink of dropping demands to protect the 'Dreamers,' undocumented immigrants brought to the U.S. as children (protections that are supported by 74 percent of Americans). 'He's not asking for the kind of money that would build a wall sea to shining sea,' reasoned Missouri's Claire McCaskill. 'He's asking for the kind of money that can say he built a wall.'"

The root of the Resistance is the sense of outrage we all feel, and that outrage, for most of us, is manifested in a continual, simmering anger. That anger, in turn, fuels our resolve.

"Institutions abhor abnormality; even in politics, parties would often rather fight along familiar lines. The passage of time makes Trump's America seem less strange. Politicos are wary of challenging a president presiding over a thriving economy. And on some level, Trump benefits from the basic dynamic that sustains any cult: His version of reality is so absurd that the only way to peacefully coexist with it is to accept his behavior as normal."

The Criminal in the Oval Office never did an hour of public service in his life and is wholly, completely and totally unfit for the office. Everything he has done up to this point demonstrates a malignant hatred for and intent to destroy the foundations and institutions upon this country was built. He is in a very literal sense a form of cancer on the Republic.

Related Topic(s): Anger; Anti-trump; Democrats; Hatred; Protest; Resistance, Add Tags
Add to My Group(s)
Go To Commenting
The views expressed herein are the sole responsibility of the author and do not necessarily reflect those of this website or its editors.