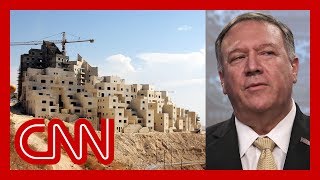 Part I -- An Embarrassingly Hard Moment

There is no doubt about it: at our present moment in history it is embarrassingly hard to be a defender of the rule of law. This is particularly so when such laws seek to assert and protect human rights. It is embarrassing because being supportive of such regulations should be a "no-brainer." Instead, it pits you against the U.S. government and its closest ally, Israel.

Thus, there is the fact that while there are many countries that take no heed of international law in this regard, if you happen to be an outspoken humanitarian Jewish American, you are really going to have a tough time of it. You are assailed on one side by powerful American leaders who attack international law with manifestly faulty reasoning (see below). On the other side, one is confronted by Zionist Jews, both inside and outside of Israel, who would destroy not only the international law that stands in the way of their territorial greed, but the ethical and moral integrity of the Jewish people as well. For all those Jewish Americans who see value in defending human rights and the rule of law, I truly commiserate: it is not easy being us!

In its latest assault on the rule of law, the Trump administration has declared that the Israeli settlements in the Occupied Territories are legitimate. Secretary of State Mike Pompeo, a self-described advocate of "Christian diplomacy" has led the way in this. He stated that: "After carefully studying all sides of the legal debate, this administration agrees with President Reagan [who, back in 1980, expressed a similar sentiment]. The establishment of Israeli civilian settlements in the West Bank is not per se inconsistent with international law."

No details were given on the "careful study" Pompeo claims to have been made. And, frankly, it is hard to take this assertion seriously because the Trump folks are not known to be objective, or even attentive, when it comes to detail. No information was given on what basis Ronald Reagan came to his opinion. Nor is it known whether or not Reagan was senile at the time he spoke. And, no elaboration was made as to what "per se" means in the context of Pompeo's declaration.

The Secretary of State went on: "The hard truth is that there will never be a judicial resolution to the conflict, and arguments about who is right and who is wrong as a matter of international law will not bring peace. This is a complex political problem that can only be solved by negotiations between Israelis and Palestinians."

This bit of conjecture is dubious at best, and if such conclusions are the product of the Secretary's "careful study," we can conclude that Pompeo is either being disingenuous or is ignorant to the point of incompetence. Here is what I mean:

The conclusion that "there will never be a judicial resolution to the conflict" is a contrived one. Pompeo should certainly know that there are readily discernible reasons, most of them coming from the U.S.-Israeli side, why attempts to apply international law as the basis of a settlement have so far failed. Actually, there are at least forty three reasons -- that is the number of vetos the United States has cast in the UN Security Council to protect Israel, largely from international law, between 1972 and 2017. In addition, one should never say "never."

Pompeo's final conclusion that "this is a complex political problem that can only be solved by negotiations between Israelis and Palestinians" is simply a throwaway line that has no meaning, given the history of those "negotiations" that have been attempted.

Perhaps the most egregious assertion made by Secretary Pompeo was that all the U.S. is doing is "recognizing the reality on the ground." This same excuse was used by the Trump administration when it blessed the occupation of the Golan Heights. Subsequently, some people assigned to the U.S. embassy in Jerusalem have claimed that all Trump was doing was recognizing the "truth."

These claims oversimplify and distort the current situation to the point of absurdity. Mr. Pompeo and those folks at the embassy are not dabbling in some field of physics here. They have not come along and discovered a new naturally occurring phenomenon. The fact is that in our social, economic and political worlds we humans do not discover reality, we create our own constantly fluctuating "reality." And, as touched on above, today's variation on fluctuating "reality" in places like Gaza, Jerusalem, the Golan Heights, and the West Bank are the result of Israeli actions that defy international law. That makes those acts and their consequences -- their "reality" -- by definition, criminal. At the same time, as we have seen, the folks in Washington gave the necessary assistance that allowed the Israelis to get away with their criminal behavior. That makes the people in Washington who provided this cover, criminals as well.

Related Topic(s): Jerusalem; Jewish; Law; Palestinian; Trump, Add Tags
Add to My Group(s)
Go To Commenting
The views expressed herein are the sole responsibility of the author and do not necessarily reflect those of this website or its editors.