Click Here to Remove All Ads
When people break the rules badly enough in Amish culture, the community turns their backs to them. It is called shunning.
The other day, a blogger reports, Wisconsin fascist governor Scott Walker went to a restaurant and the people in the restaurant raised such a ruckus, yelling at him, that the restaurant's management asked him to leave. I'd liken that to shunning.
Firedog lake reports,

"The M******t [a restaurant] in Madison, WI confirms that on Friday night, ******* (one of the owners) politely asked Scott Walker to leave the establishment when other customers began booing him. A bartender at The M*****t said that "his presence was causing a disturbance to the other customers and management asked him to leave.'

The problem is, apparently, right wingers didn't like this action, so they threatened the restaurant. Th proprietors requested that the report be taken down. The blogger who originally posted the story, Mindstain, took down the original posting and replaced it with this: 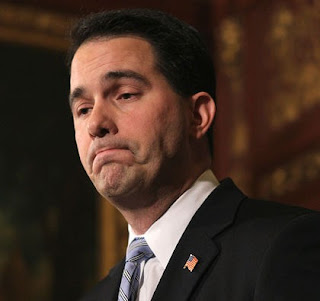 Come looking for an article about Scott Walker being booted from a Madison restaurant? Yes, you came to the right place, but at the request of the restaurant owner due to abusive phone calls, the article has been hidden for the time being.

This raises a wonderful point. Why should a restaurant owner be afraid to refuse service to any person? Would the same people have started calling that restaurant and making threats if the person they asked to leave was Black? Muslim? Democrat? No. No they would not.

For those of you who know which restaurant it is, please, at the request of the owner, do not share this information. Not only are they getting TONS of supporter phone calls, but very nasty and threatening ones as well. This is their place of business, and as with any business they have the right to refuse service to anyone. When I have talked again with the owner, the content may be visible once more but while you are waiting, please discuss what YOU think about being able to refuse service to ANYONE, even if that someone is a government official.

Thanks so much for your patience.

It takes a lot of guts to eject the governor-- to face him and tell him to leave and to face the risk of losing business because you've put yourself at risk by angering one partisan base.
Are there ways that this idea of shunning could be exploited by the left, by the under-attack Middle Class and workers?
What's your take?

Related Topic(s): Governor Scott Walker, Add Tags
Add to My Group(s)
Go To Commenting
The views expressed herein are the sole responsibility of the author and do not necessarily reflect those of this website or its editors.