It's hard to imagine how any realistic economist could look at the following two charts and conclude that the Japanese Government failed to revive the Japanese economy over the last twenty years because they spent far too little on fiscal stimulus. Japanese government debt as a percentage of GDP was 52% in 1989, prior to their real estate and stock market crash. Today it stands at 200% of GDP. Current budget projections show the debt reaching 250% of GDP by 2015. Meanwhile, Japanese consumers and corporations have been reducing their debt for the last 16 years. The net result has essentially been a 20 year recession. The pundits who never see a crisis on the horizon point to the fact that Japan has not collapsed under the weight of this debt as proof that the U.S. debt level of 90% of GDP has plenty of room to grow without negative repercussions. This is the same reasoning "experts" used in 2005 when they proclaimed that home prices in the U.S. had NEVER fallen on a national basis, so therefore there was no reason to worry about home prices. A basic economic law is that an unsustainable trend will not be sustained. When the 3rd largest economy in the world implodes, the reverberations will be felt across the globe. 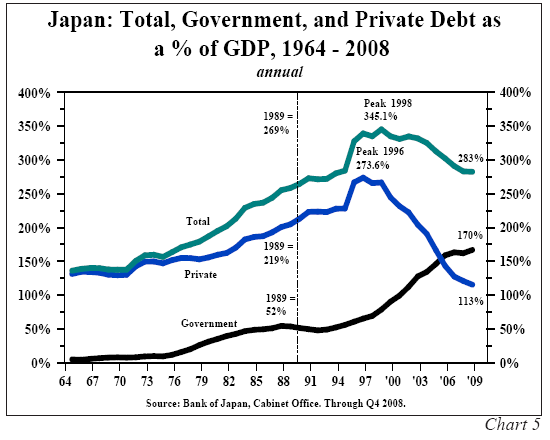 John Mauldin has described Japan as a bug in search of a windshield. Bug meet windshield.

The "nothing bad has happened so far" crowd continues to spout fallacies about the Japanese owning the debt to themselves and their high savings rates as the reason that Japanese debt can continue to grow. About 95% of Japan's debt is held domestically, which sovereign-debt agencies have said supports the country's creditworthiness even as borrowings have reached 200% of gross domestic product. In a sign that base is waning, Japan's public pension fund, holder of 12% of outstanding debt, sold more government bonds than it bought for the first time in nine years. The National Savings rate has declined from 18% in 1980 to 2% today. The days when the Japanese could issue long term bonds yielding 1% and have it all bought by Japanese citizens is over. In 2010, the Japanese government will issue an additional 53 trillion in government debt. At the same time tax revenues will drop from 46 trillion to 37 trillion. Do you see the bug approaching the windshield?

The Japanese government has spent two decades squandering the wealth of its citizens. The New York Times detailed the trillions wasted in a story last year:

Japan's rural areas have been paved over and filled in with roads, dams and other big infrastructure projects, the legacy of trillions of dollars spent to lift the economy from a severe downturn caused by the bursting of a real estate bubble in the late 1980s. During those nearly two decades, Japan accumulated the largest public debt in the developed world while failing to generate a convincing recovery. Between 1991 and 1995, Japan spent some $2.1 trillion on public works, in an economy roughly half as large as that of the United States, according to the Cabinet Office.

Dr. Ihori of the University of Tokyo did a survey of public works in the 1990s, concluding that the spending created almost no additional economic growth. Instead of spreading beneficial ripple effects across the economy, he found that the spending actually led to declines in business investment by driving out private investors. He also said job creation was too narrowly focused in the construction industry in rural areas to give much benefit to the overall economy. He agreed with other critics that the 1990s stimulus failed because too much of it went to roads and bridges, overbuilding this already heavily developed nation. Critics also said decisions on how to spend the money were made behind closed doors by bureaucrats, politicians and the construction industry, and often reflected political considerations more than economic.

In Hamada, residents say the city's most visible "hakomono," the Japanese equivalent of "white elephant," was its own bridge to nowhere, the $70 million Marine Bridge, whose 1,006-foot span sat almost completely devoid of traffic on a recent morning. Built in 1999, the bridge links the city to a small, sparsely populated island already connected by a shorter bridge. "Roads and bridges are attractive, but they create jobs only during construction," said Shunji Nakamura, chief of the city's industrial policy section. "You need projects with good jobs that will last through a bad economy."

Last year, Moodys downgraded Japan from a AAA rating with the following warning:

The rating reflects the risks of Japan's high level of debt, which leaves the country's fiscal position vulnerable to shocks or imbalances that would cause a sharp rise in interest rates. The ratings also reflect the sizable but temporary increase in the government's budget deficit caused by the severe effects of the global collapse in trade and recession on the Japan's economy. Further, Japan's large foreign exchange reserves, although large compared to those of most other countries, are only a small fraction of its liabilities and could not alone eliminate refinancing risk at a time of severe stress.

For the government's bond rating to move higher, Japan's economy would need a sustained recovery and the government would need to shrink its budget deficit and lower its debt trajectory. Conversely, the bond rating would be under pressure if the trend in debt increases continues, which could result from demographic pressures on social welfare and pension expenditures, or if the market loses enthusiasm for the government's new debt issuances.

The Japanese have kept their interest rates under 2% for the last 15 years. With a current rate of 0.3%, there is no room for further decreases. The concept was that these rates would spur businesses to expand and invest. They would spur Japanese savers to become Japanese spenders. Neither happened. Instead, investors throughout the world borrowed Yen at 1% and invested the proceeds in investments that would earn in excess of 1% the carry trade.

James Quinn is a senior director of strategic planning for a major university. James has held financial positions with a retailer, homebuilder and university in his 22-year career. Those positions included treasurer, controller, and head of (more...)
Related Topic(s): Economic; Government; Markets; Paul Krugman; Politicians; Stimulus, Add Tags
Add to My Group(s)
Go To Commenting
The views expressed herein are the sole responsibility of the author and do not necessarily reflect those of this website or its editors.