I used to roll the dice
Feel the fear in my enemy's eyes
Listen as the crowd would sing
"Now the old king is dead! Long live the king!"

America has squandered the human sacrifice, blood, sweat and tears of two generations in less than seventy years. We have been an independent country for 226 years. From 1783 until 1946 was an unrelenting upward trajectory for the beacon of the free world. With the end of World War II, America was the last country standing. Germany and Japan were in shambles. Russia had lost millions of citizens, with Stalin about to murder millions more. Great Britain was a shell of its former self. The American Empire had been born. We were the manufacturer to the world. We rebuilt Europe and Japan. Our military was dominant. We made the best automobiles. We built 41,000 miles of national highway over two decades. In 1946, one in three U.S. workers was employed in the manufacturing industry. Today, less than one in ten workers makes something. 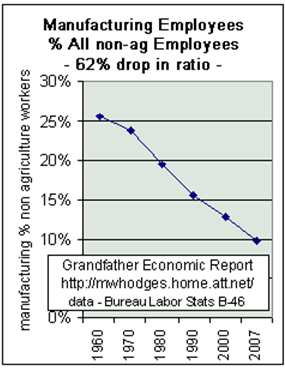 In the years following World War II, the United States ran trade surpluses of 2% to 4% of GDP. We regularly ran surpluses until the late 1970’s. Since the late 1970’s, the United States has run increasingly large trade deficits, reaching 6% of GDP in 2007. For the last three decades, Americans have tried to spend their way to prosperity. The government politicians and their moneyed backers have sold the idea that Americans could be the thinkers for the world, while other countries could do the menial work of producing stuff. After thirty years we are left with a hollowed out economy of paper pushers. It may be a reach to transition the Wall Street geniuses who created MBSs, CDSs, and CDO’s into jobs building bridges. The manufacturing jobs are gone. Our workers are left to sweep the streets they used to own. 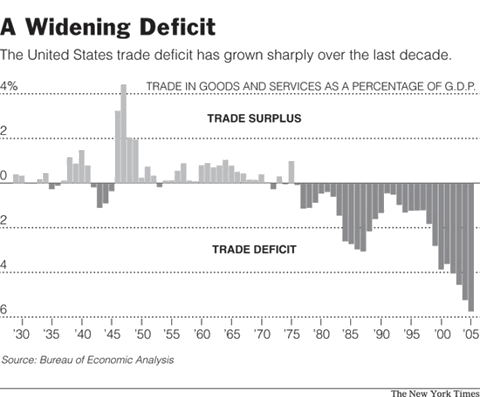 After three decades of burning our furniture to keep warm, we are left owing the rest of the world $2.7 trillion. Many of these countries don’t like us. Ben Bernanke is actively trying to drive the value of the U.S. dollar down, while decreasing interest rates paid on this government debt. As Ben prints trillions of new dollars, the value of China’s, Japan’s and the oil exporting countries’ holdings goes down. The U.S. will run a $2 trillion deficit in the next year. We need these foreign countries to buy at least $1 trillion of our new debt. We are sure they will do so. Our reasoning is, what else can they do? From a purely financial standpoint, it is insanity for a country to make an investment in an asset paying 2.5% interest, when in one day last week the Federal Reserve purposely knocked the value of the dollar down 5% in one day, wiping out two years of interest income. 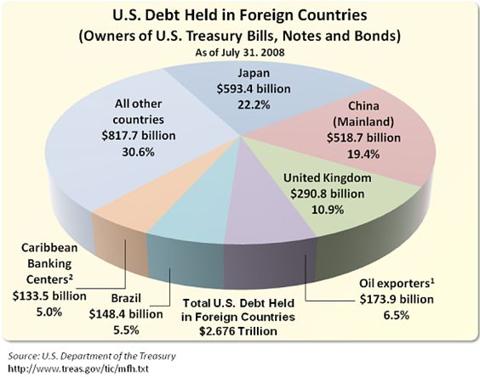 The truth is that foreign countries are not stupid. They are already changing their strategy regarding American debt. The Treasury Department released their monthly analysis of international purchases and sales of U.S. assets for February, last week. Below is directly from that report.

Net foreign acquisition of long-term securities, taking into account adjustments, is estimated to have been negative $60.9 billion.

The Chinese are not fools. They can clearly see that the U.S. will try to devalue our way out of our financial mess. They are going to put the $500 billion of USD holdings to work, before it becomes worthless. Recent examples reported by the Washington Post have been:

James Quinn is a senior director of strategic planning for a major university. James has held financial positions with a retailer, homebuilder and university in his 22-year career. Those positions included treasurer, controller, and head of (more...)
Related Topic(s): Banks; Bubbles; Congress; Congress; Decline; Empire; Evil; Fear; Government; Housing; (more...) Injustice; Money; Money; State; Taxes; Thoreau, Add Tags  (less...)
Add to My Group(s)
Go To Commenting
The views expressed herein are the sole responsibility of the author and do not necessarily reflect those of this website or its editors.