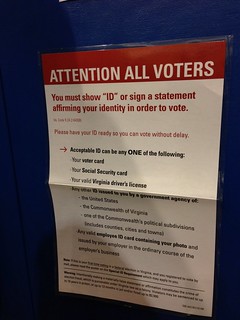 By Robert Weiner and Joseph Abay

Two riveting developments October 8 strike at the heart of Americans' right to vote and minorities' abilities to have fair power.

A report by the U.S. Government Accounting Office requested by five senators (Sanders, Leahy, Durbin, Schumer, Nelson) found that minority turnout was reduced 2-3% in states with ID laws--despite no ID fraud--because of the cost of procuring the ID's. Close elections were clearly at risk. GAO found that "the falloff was greatest among African Americans, young people, and newly registered voters."

Likewise on October 8th, The Supreme Court voted 7-2 (with dissents from Ginsburg and Sotomayor) overturning the 4th Circuit Court of Appeals decision that would have reinstated same day registration and students' out-of-precinct voting in North Carolina. This ruling has added North Carolina to the already long list of 22 other states with Republican governors and legislatures that have enacted voter restriction laws across the nation. These laws will take a massive toll unless the courts reverse them or the victimized rebel in large numbers and find a way to the polls.

Given the Supreme Court's attitude, there will not be time for the former before the November 4 Election Day clock ticks down--so standing in lines again to have voices heard -- which worked in 2012 and 2008 -- may again be the only answer to stop a right-wing takeover of the Senate and massive progressive losses in the House.

"Voter fraud" legislation curtailing voting when no fraud has occurred has become the staple of the Republican agenda. They were helped by the 2013 Shelby V. Holder decision. The conservatives on the Supreme Court gave a 5-4 decision against Attorney General Eric Holder, invalidating Section 4 of the Voting Right Act. The statute had mandated federal government 'preclearance' in regards to changes to state election laws. This legislation was essential in preventing African American disenfranchisement. George W. Bush-appointed Chief Justice John Roberts decreed that we now live in a 'post-discrimination' society, despite congress almost unanimously finding the opposite when it passed and amended the law.

Following the court's ruling, Republican governors and legislatures ran wild. 93 restrictive voting bills were introduced in 33 states; 22 states have passed them, and counting. On September 29th, House Minority Whip Steny Hoyer, the #2 House Democrat, contended that "Republicans around the

country are trying to make it more and more difficult for people to vote, because their premise, which is accurate in my opinion, is if everyone votes, Democrats win." Pennsylvania had passed a law in 2012, and Pennsylvania House Majority Leader Mike Turzai said: "Voter ID is going to allow Gov. Romney to win Pennsylvania--done." Not quite--the Pennsylvania courts overturned it. Iowa Secretary of State Matt Schultz openly admitted voter suppression is directly linked to giving conservatives more power over "abortion, gay marriage, and a whole lot of social issues we care deeply about."

Republicans present voter fraud as a pervasive problem, something that any fact-checking shows is not true. Between 2002 and 2012, out of a total of 600 million votes cast, only 10 cases of voter impersonation were reported. Any "fraud" has amounted to only 0.00000344666% of all votes cast. Why do Republicans love voter ID laws? They disproportionally affect African American voters, a critical Democratic Party voting bloc. African Americans account for 25% of Americans eligible to vote without Photo ID, while white voters account for only 8%.

Holder avowed that the Justice Department will combat voter suppression state legislation "that seeks to take advantage of the Supreme Court's (2013) ruling." Regrettably, his resignation on September 25 this year could prove disastrous for the federal lawsuits battling vote rigging "laws", if his successor is not as dedicated to the cause as Holder.