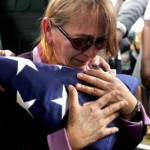 As you can tell by Kathy's article today (and you might want to read it before you read this) she's pissed off. I mean really angry about the entire Dick Cheney saga. Can't blame her. As she writes, she's been slogging through the muck of this filthy Bush Crime Family for eight years of active duty and now a seemingly endless time anticipated in the ready reserves. (Yeah, it's just like military service.)

But, see, Kathy's female. And that may explain the depth of her anger. She's the gender that squeezes out all the babies that grow up and then go die in war -- endless war -- war begun by swine like Dick Cheney. It matters not what the mothers may have had in mind for their children. Dreams? They die when the son (and now daughters, too) die. Or they crumble into dust when the child returns from a horrific time in combat with arms blown off, heads caved in, souls eaten away, minds completely blown. Dreams for the children nurtured and cared for all those years? Plans? Hopes for their future? Forget them. Or go mad trying.

Yeah, Kathy's pissed. I can't imagine there is a woman who has seen her child depart for a war based on such criminal deception who is not enraged. Oh, sure, there are the women who have been deceived not just by slime like Dick Cheney, but also by their churches, by their political leaders, by their education, by what has been drilled endlessly into their consciousness by a culture that is mostly insane. A woman like this may simply give up. Take my son. Just take him. There's nothing I can do.

I understand Kathy's anger. It is righteous and powerful. It means that she would not -- under any circumstances -- allow her child to be sucked into the vortex of some madman's war lust, some poisonous, cowardly murderer like Dick Cheney -- who never took up arms himself, to expand by force the predatory capitalism he personifies. (He had better things to do in the sixties than join the military he once condescendingly declared.) But, Kathy? She would take her child and disappear before she would allow lies camouflaged as duty to devour the dreams she has for her child.

And, she is aware -- acutely aware because she is a woman -- of the unspeakable pain into which a mother is drowned, burned, flayed, because of the cowardly, destructive actions of a liar such as Dick Cheney. She knows, also, the suffering, equally unspeakable, of all the women whose children, sons, husbands, brothers, daughters, who have been killed by the murderous lies forced upon them by Dick Cheney, lies that arrived in the form of bombs and fire and thunder and pain and death, endless death.

Yeah, Kathy's pissed today. As she was yesterday. And last week. And as she will be until killers like Dick Cheney are brought to justice. And, that may be never.

Mike Malloy is a former writer and producer for CNN (1984-87) and CNN-International (2000). His professional experience includes newspaper columnist and editor, writer, rock concert producer and actor. He is the only radio talk show host in America to have received the A.I.R (Achievement in Radio) Award in both (more...)
Related Topic(s): Anger; Children; Crime; Dreams; Military; Mothers, Add Tags
Add to My Group(s)
Go To Commenting
The views expressed herein are the sole responsibility of the author and do not necessarily reflect those of this website or its editors.