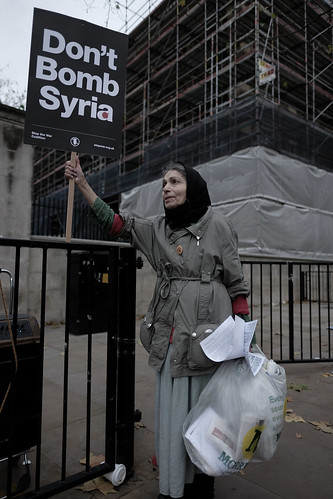 Syrians are living the horror brought to them by the criminal West. They cannot afford the complacency of shrugging their shoulders in indecision, not when their lives and their ancient civilization is being threatened by Western-paid terrorist mercenaries of the worst kind.

As countries are destroyed, and its peoples are slaughtered -- think Syria, Libya, Ukraine, and others -- by abhorrent Western proxy mercenary terrorists -- public institutions are contaminated, and ultimately replaced by parasitical privately looted facsimiles. Public banking is looted and destroyed in favour of transnational banksterism, US dominated World Bank funding, and austerity imposing IMF loansharking.

Worldwide food security is being destroyed and replaced by monopolistic biotech tentacles and engineered dependencies on cash crops. The world food supply is increasingly unhealthy junk food with empty calories. National currencies are forced to devalue; killer economic sanctions are imposed on any nation that fails to obey the international cartels of capitalism backed by raw US military violence. The unknown and unseen boot of totalitarian control imposes itself in the lie that it is the invisible hand of capitalism that magically turns greed into the public good. Amidst the cloud of public spectacles, absurd theater, graphic violence and private pornography are diversions from reality and confusion of the truth. Comprador regimes acting sold out to corporate mega-monopolies, imperialist powers and private oligarch interests. Ignorant, helpless and frightened domestic populations can do little but shrug and bear it as their fate.

Only a few nations such as Syria dare to submit and they are ruthlessly turned into carnage as examples for the rest of the world to pay attention to what happens when one does not obey. While the public in the West is propagandized to hate Syria the rest of the world admires and respects Syria for its resistance to the West led by the USA.

Do the American people and their Canadian co-conspirators never wonder why they have so many countries on their enemies list, and what all of them have in common? It has nothing to do with democracy, freedom, human rights, terrorism or any of the other excuses that are used to vilify non-compliant countries to the West's dictates. The list is those countries that refuse to buckle under the boot of imperialism: Syria, Libya, Iraq, Afghanistan, Iran, Venezuela, and the Democratic Peoples' Republic of Korea for example.

Mark Taliano is the author of "Voices from Syria". Click to order. Also available in e-book/PDF format:click here to order.

Related Topic(s): Austerity; Banking; Capitalism; Carnage; Killing; Media; Mercenaries; NATO; Propaganda; Regime Change; (more...) Sanctions; Sanctions; Sociology; Syria; Terrorism; Ukraine, Add Tags  (less...)
Add to My Group(s)
Go To Commenting
The views expressed herein are the sole responsibility of the author and do not necessarily reflect those of this website or its editors.