Singing the blues can be a good thing. Democrats in the Commonwealth of Virginia swept the elections last night.

Virginia's voters in Prince William County elected the first-in-the-nation transgender individual to any state's legislative body, in a landslide. Danica Roem won the victory in the House of Delegates' District 13 against the author of the anti-transgender bathroom bill, and flipped the state house seat from red to blue. 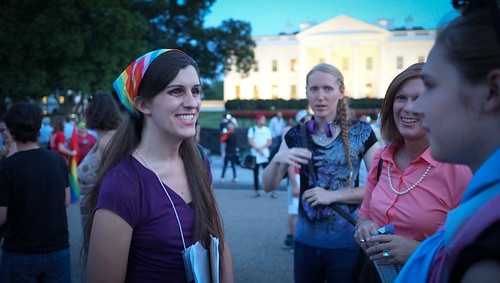 Democrats flipped 16 Virginia House seats so far, it would take winning one more seat for the Dems to regain full control of the House of Delegates, and therefore be in control of 2020 redistricting. That remaining election is too close to call, and some may be recounted, but the landslide election put the count at 50 Dems and 49 Republicans in the Virginia House, effectively ending the 18-year GOP control of the 100-member House.

The top three statewide offices were won by Democratic candidates dedicated to a woman's right to choose, LGBT rights, conservation issues and healthcare:

Ralph Northam, who won the governorship, is a doctor. He has defended a woman's right to access basic reproductive healthcare, and defended a woman's constitutional right to access abortion. He led the fight against the GOP's infamous trans-vaginal ultrasound law. (Virginia's governors may not run for reelection, they only serve one term at a time.)

Justin Fairfax, became the second African American to win a statewide office in VA, he won the Lt. Governorship. Doug Wilder was the first African-American elected to statewide office, first as lieutenant governor (1986) and then as governor (1990).

Virginia elected its first Asian-American woman to the House of Delegates, Democrat Kathy Tran, who won the race in Virginia's 42nd District, flipping the seat from red to blue.

RT @womensmarch: Kathy Tran came to the U.S. as a refugee from Vietnam when she was an infant. Tonight, she became the first Asian American… at

Elizabeth Guzman and Hala Ayala are the first Latinas to be elected to the Virginia House. The women both defeated long term Republican incumbents in Prince William County, and flipped their districts from red to blue.

Related Topic(s): Democratic Socialist; Democratic Socialists Of America; Election; Landslide; Redistricting; Transgender; Virginia Governor, Add Tags
Add to My Group(s)
Go To Commenting
The views expressed herein are the sole responsibility of the author and do not necessarily reflect those of this website or its editors.